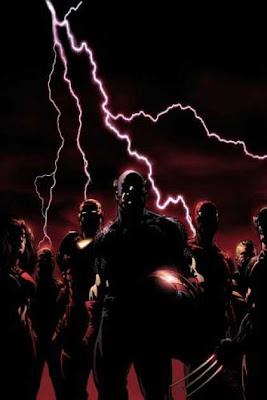 So during spring break we had a pretty good run - D&D, ICONS, oh and the new Marvel game. Your heroes this week are:


We began with the handing out of the cheat sheets and deciding why each hero was near the super-prison known as the raft on this particular night. We mostly used the suggestions in the book so I have no great revelations here. Daredevil is in lawyer mode headed over to talk to the Sentry via ferry, Panther is in a helicopter on his way to something else and Kitty Pryde got a tip from a contact that something was going to happen so she's on the same ferry as Matt Murdock. 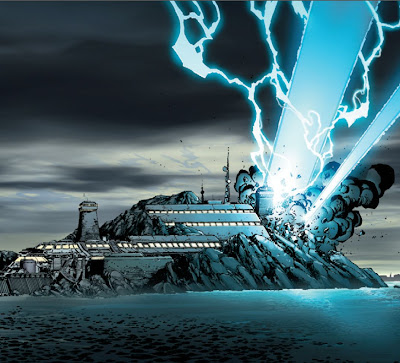 Soon enough, lightning storm, lights out, explosion - Panther lands the chopper just as the ferry pulls in, and the helipad is remarkably close to the dock. Three heroes step forward, ready for trouble. They find it in the form of Count Nefaria ...
Nefaria is a pretty tough customer by himself but this was a rather one-sided fight. Still recovering from his imprisonment, his plan was to take the ferry to freedom. The heroes were not going to let that happen and he was beaten pretty severely by Black Panther and Daredevil despite his Superhuman Durability. I'm pretty sure he was scorched by Lockheed at one point too. Panther took a pretty good shot too, but after a brief struggle the three heroes continued on, while Matt's law partner flagged down some guards to secure the villain.
Approaching the prison proper the team was set upon by a mob of unpowered super criminals. Being an all-male group Kitty, the Girl Next Door, took the opportunity to use her feminine wiles (!) to confuse the escaping convicts - then Panther and Daredevil beat the stuffing out of them, suffering a few bruises in return - nothing special for experienced heroes like these.
Reaching the prison itself, they decided that the best approach would be to investigate the huge hole blasted in the thing that seemed to be the most obvious and most popular escape route. They hoped that by bottling this up they could prevent any further escapes. The three capes decided to advance down the tunnel/crater a short distance to give them a better chance at bottling up any opposition,
As they climbed down into the darkened hole, things went well at first. Then they noticed a large chunk of rock rising through the tunnel from the lower levels of the prison. In the dark it was difficult to make out details (well, except for Daredevil) but they decided that this could not be a good thing and Black Panther leapt down onto the rock to confront ... Graviton!

Graviton was lifting the rock chunk as his personal escape vehicle - and the heroes were right in its path! Panther was hurled off of the ledge and into space but was saved by Kitty's intangibility. Daredevil used his club-swingline to swing out over the rock and he too moved to confront the Master of Gravity! With Kitty's help Panther leapt back onto the rock and the two fighters sprung into action, aided by Lockheed and an Airwalking Shadowcat. Panther used his energy claws to tear into the rock, fracturing it and knocking the villain off-balance while Daredevil jump-kicked him in the face, aided by Kitty's phasing powers. Graviton did knock them around some more, and all 3 heroes were injured to varying degrees, but they finally managed to knock Graviton out as the rock shattered and the unconscious master of gravity tumbled back down into the darkness. Black Panther and Daredevil were not interested in venturing further into the prison as containment was their goal, so they took up positions along the tunnel and settled in to react.
Also, Panther asked Kitty to be his Queen

Yeah - you can take the XP-monger out of the dungeon, but he's still going to go for the XP's
DM Notes: This was our first run with the new Marvel Heroic system and we all had a blast. Unlike Champions and M&M (and more like ICONS) this was played sitting around the living room without a central table or mini's or a battlemat or map of any kind. This makes for a more relaxed game but the Apprentices (and friend) were really into figuring out creative justifications for using their powers. I say "justifications" because that's really what it is - mechanically the players are trying to build a pool of dice that will let them do what they want to do and the best way to do that is to come up with plausible justifications for why this d10 or d12 ability should be included over that d6 or d8 ability. It's comparable in some ways to "Balderdash", where if you can make the outrageous sound reasonable you can do pretty well. That said, they were pretty quick to toss a d4 Distinction in there if they wanted an easy Plot Point. We did not pay attention to XP or milestones for this run - well, except as noted above. We played for about two hours and it didn't feel like a grind.
Nefaria and the Mob are pretty standard parts of the adventure but I changed things up after that and went a little more epic with Graviton as he is a major force in the early episodes of the animated Avengers series and I wanted them to encounter someone they knew was a major villain. Carnage is the usual "next encounter" but I wanted something different and it was worth it when I heard "Oh THAT guy!" in a seriously concerned tone of voice.
Things that went well: They grasped the dice pool and pool-building concepts instantly. They grasped the importance of Plot Points instantly. The idea of sacrificing something (like using a d4 instead of a d8 or shutting down a power) was a little trickier for them but they got it fairly quickly. The concept of damage aiding the opponent instead of hindering the victim is a tricky one, but they got it faster than I expected. The loosely-defined approach to powers was seen as a plus too, probably aided by ICONS experience as it uses a similarly loose approach to power specifics. Not having to focus on exact movement speeds and ranges and areas of effect makes for a different kind of game.
Things that can get better:
So it was enjoyable and we all have a lot to learn. It felt a lot like the first time I ran 4th edition D&D - so many new terms and mechanics and options to figure out, but having run D&D (and Supers games) before certain things should work a certain way and they pretty much did. A year from now this won't feel like it should even count as actually playing as it was more of a test run.
I'm still surprised at the characters they chose - I was sure Cap and Iron Man and Wolverine were top 3, followed by Colossus and Spiderman, but somehow we ended up with the king of Wakanda, a blind vigilante, and a teenage girl! I can guarantee you this has not happened in M&M or ICONS or any other game! We will see if the character variety continues, but that standard template for characters thing they have in this one certainly levels the playing field.
Comparison: I've been a Champions fan for 30 years and that's not going to change. I've liked M&M for 10 now and that won't either. ICONS is still the best for me for "light and fast" supers games. All that said there is a place for this new system. I think it's best for 3 or more players as you can play off of each other when you have more things to work with and it's less of "my 4 dice vs. your 4 dice over and over again" which could be a real slog for a solo or duo game. Other than that I'm not sure about its place. I'd start with "if your players hate Champions then try to get them to try this one out as it's an opposite approach in about as many ways as you can have. 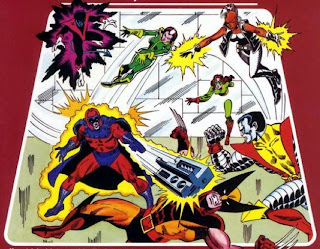 Next up: I think I'm going to convert The Breeder Bombs from the TSR MSH adventure and make them all take an X-Man. It's a fairly simple adventure that should fit the MHRP structure well. I'll let y'all know how that goes.
Posted by Blacksteel at 7:00 AM

Thanks for the recap. Sounds like fun. I'll have to give the Marvel game a look. We're running Icons now and though it's a great game and has a lot of potential, I've run into a few issues with the powers. Nothing house rules can't fix if need be.

That is one helluva comic, if Daredevil, Black Panther, and Kitty can beat both Count Nefaria AND Graviton. Each of those dudes can take out the Avengers single-handedly.

Your players really rocked it.

Yeah let's just say the villains were probably not at the peak of their abilities. Still, they were pretty tough so I'm glad the crew jumped right on in and took them on.