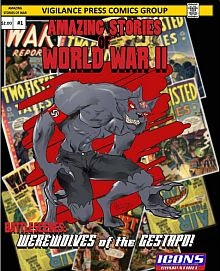 Since it was spring break and I was off I knew I would be sleeping in, but the kids would be up early, so the night before I wanted to play I left my printed ICONS rulebook out in the living room with a note on it that said "Make a WW2 Superhero". I also primed the pump by having us all watch  Captain America on DVD the night before without saying anything about a game. By the time I was up and about, there were three excited kids with three characters ready to go. 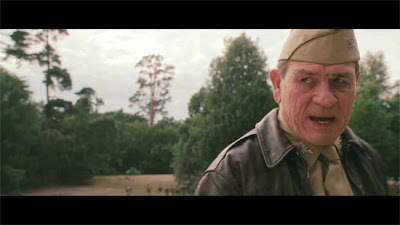 These three have been training since America entered the war and now, in early 1943, it's time for them to see their first action! After shipping out for London, they are briefed by Colonel Jones, OSS, who informs them that a French Resistance leader has been captured by the Germans and is being interrogated. The brass want him rescued. Rumor has it that he was kidnapped by a new "wolf brigade" that is supposed to be some kind of special unit. Information on them would be valuable as well. They are to be inserted tomorrow by air near the house where the prisoner is being kept and will be given a transmitter to radio for pickup when they have secured their package.

The next day the heroes gear up (rifles, knives, radio, canteen, rations, maps) and load up, and are dropped without incident. The house is in a forest so their approach will be somewhat covered. Using their maps the team approaches with FIST scouting ahead using his power to blend in with the forest.

Approaching the house, they encounter a patrol of 4 soldiers plus one big guy who's going shirtless. Sword-guy unloads his grenade-launching swords (!) into the patrol, blowing the soldiers away as the big guy suddenly sprouts fur and claws and charges them! Leech counter-charges, grabs a handful of fur, and suddenly HE sprouts fur and claws! The wolf seems a little confused by this and is quickly knocked out by the team. In the aftermath, Leech discovers that he can regenerate wounds. So far, so good.

Advancing to the edge of the woods the heroes observe the house. It's two stories, wooden, and guarded by two soldiers and two wolf-soldiers at front and back entrances. They eventually decide on a gambit to gain surprise.

Leech, still hairy and clawed though a bit shorter than the other wolf-types, lopes towards the house dragging the seemingly unconscious body of sword-guy behind him, shouting "I got one but there are more in the woods." With only the briefest of pauses the wolf-soldier tells him to watch the door while he and the other guards charge off into the woods. FIST then materializes next to them on the front porch of the house and all three are pretty happy with their plan.

Entering the house they walk straight into a large room with two conference tables covered in paper and numerous german officer types talking and shuffling - until they notice the wolf, the sword guy, and the large robot walking in.

"Get down" one of them shouts in german as pistols appear and begin firing at the robot in the back. Leech  leaps for one group as if seeking cover while sword guy abandons his prisoner ruse and foomps a double grenande set over the other table, wounding many. A confusing gun battle breaks out as Leech tears into his "friends", grenades are thumped all over, and FIST proves to be a decent marksman with a rifle from 10 feet away as he just stands in the open, shooting down one target after another, slugs pining off of his armor.

Silencing the officers, the team advances inwards, looking for their prisoner, but they find the back door guards instead, seeking the source of the noise. One wolf goes after Leech while the other goes after FIST and the two troopers start shooting at sword-guy. Leech and his wolf claw at each other for some time, each regenerating the wounds as fast as they can inflict them. FIST struggles with a face full of wolf while trying to bring his rifle into play, then gives up and just punches it - across the room and through the outer wall of the house into unconsciousness. Sword guy takes down his two opponents and joins Leech in beating down the remaining wolf until FIST walks over, grabs it, and throws it through the wall as well. With a shattering CRASH followed by a thud, this skirmish is over.

Moving upstairs the team finds a locked room and kicks down the door, seeing a trenchcoated Nazi officer, a beaten man tied to a chair, and a much larger, stronger-looking silver werewolf. Leech detects mental powers in the officer and moves to engage him as he has mind shield. FIST starts shooting the werewolf. Sword-guy considers his options then grenade-blasts the officer, knocking him out. Leech switches targets and moves in on the wolf as it charges FIST. This wolf proves to be incredibly tough! Leech gets a hand on him and finds he has gained some Invulnerability as well as his other powers while Sword-guy finds that his swords have no effect on the creature. FIST and the silver wolf knock each other around the room as Leech grabs the prisoner and heads downstairs.

Realizing what is happening, the big wolf knocks FIST down, speeds past Sword-guy, and leaps down the stairs, cutting off Leech, who drops his passenger and prepares to go claw-to-claw. Sword-guy pulls out the radio and sends the pickup signal, hoping they can last long enough to get back home. Then FIST reappears and leaps down. Grabbing the wolf in both arms, he squeezes, eventually crushing the breath out of the creature, knocking it out.

Somewhat later a plane lands and a new team of heroes is headed back to England with a French Resistance Leader, a restrained silver werewolf, and an unconscious German Psychic officer.

DM Notes: I was very happy with this run and so were the Apprentices. They were all fired up to play and they did very well. They were very good about not playing it like a D&D adventure other than Blaster's drive to pick up guns for about half of the mission, until I reminded him that with an 8 Strength he could do a lot more damage up close and with an 8 Invulnerability no one was going to shoot him anyway. They worked together, remembered their goals, and didn't get too silly while they were doing it.


We spent around two hours playing through this and that was about perfect. I plan to run the others in this series  and I'm really looking forward to them - just enough content to have an interesting action-filled session.


Rules-wise things can get a little tricky in the heat of play. The main issue was that nothing in the area could hurt the robot, and neither of the other two characters could hurt the big werewolf thanks to invulnerability. This does force some thinking about how to do things beyond just attacking, but it's a little frustrating to them too. I may tinker with something like an automatic 1 point of Stamina damage on a Massive success, regardless of Invulnerability or Immunity. That would let them feel like they were contributing without totally gimping those defensive powers. Also, they did not use all that much Determination, so we will work on that in our next session. Plus: Cheatsheets! The ones out now just don't work for me so I'm probably going to make some of my own.


Next time: the war comes to London!
Posted by Blacksteel at 12:00 PM

Do the youngsters get 'WW II' as a setting? I'm really happy to hear it if they do.

Might I recommend check out the episodes of Young Justice that feature the Justice Society and the origin of Red Tornado. Lots of cool flashback footage of the Golden Age to frame the modern story.

Also, if I may, does Sword Guy actually have a sword? It's not clearly mentioned. If so, some names that might be cool include (but are not limited to)...Claymore, Rapier, The Sword, The Blade or other type or class of sword weapon - The Paladin, The Cavalier or other Knight synonym or more general but still cool names like Exemplar, The Sentinel, Honor Guard, etc.

Well, they get that it's a very clear we're-the-goodguys setting and that it's fighting a war and not stopping a bank robbery. I'm not sure they get all of the themes but they get the retro fun of it too (and enjoy thinking of things they could have that weren't invented yet). They've been subjected to enough books, museums, and History Channel specials by me that they almost have to get some of it.

Young Justice is pretty popular here and they've seen more than I have - I'll ask them about those.

Can't believe I didn't mention the swords more clearly he has two of them which was sort of the explanation for his rapid attacks. Think Deadpool to a degree. He had a blast power too and it was going to be flame-throwers but then he decided he liked AOE explosions better so he went with grenades. Originally we were thinking a launcher built into his sleeves but then someone made a joke about grenade-launcher sword-pommels and it kind of became a thing. We're not sure exactly what it would look like, but it sounds right. We tend to jump into these things and work out some of the details later so he may even turn out to be English, making your name suggestions even more applicable and giving Red an excuse to annoy me with his English accent.

Also, the big robot's catchphrase is "I can do this all day", completing the trifecta of Cap movie quotes, which they thought was amazingly clever.