Background
I'm a first generation Star Wars fan - I saw it when I was 8. Loved the original trilogy as a whole. Mostly OK with the prequels although they could have been so much more. Pretty good with Clone Wars, huge fan of Rebels. Read a lot of the books, some are good, many are not. Been playing the RPG since the late 80's (on and off) so fairly informed on the "extended semi-canon" parts as well. Had a lot of fun with the older computer games from X-Wing on up through Old Republic today. Getting into the miniatures games lately with (another) X-Wing and Armada.

Mixed feelings on Force Awakens: Liked it the first time, disliked it the second time, watched it again recently at home for the third time and I like it again.

Rogue One
I loved it. I actually walked out of a Star Wars movie for the first time since the original with no complaints. What higher praise can I give? Despite the lack of a crawl and the different music it felt very much like a Star Wars movie - a very good Star Wars movie. I don;t feel the need to go into too many details because I liked the whole damn thing from start to finish. It stayed true to itself with the way things end with the heroes, it gave us a bunch of new things and characters, it gave us some old familiar when it was called for (AT-AT's on the beach!), it gave us an awesome space battle, and it gave us the payoff on Vader that a lot of us have been looking for since the 80's - Why are people so afraid of this guy? It ain't just stories!

One standout: Pacing. This is a great example of how to build a story from slow, to medium, to slamming it home with action in multiple locations and environments. There was a lot at the end I was not really expecting to see, starting with the arrival of the rebel fleet and continuing from there. It was great. 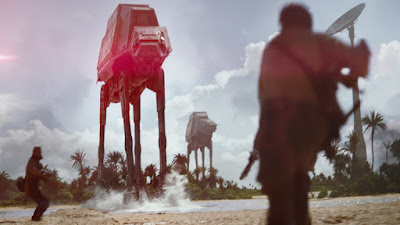