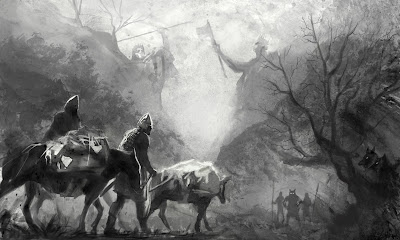 EN World has a survey up about all of the RPG's that are supposed to be released this year. There are a lot of them, and I can say that most of them are not anything I am terribly interested in or excited about but it is fun to see 50 separate entries on the list. That said, the fact that at least 20 of them are new editions of a game or a "new" game for a setting that is not new to gaming (Conan, Star Trek) is a little disappointing. I may have missed some of the other titles as reboots, so we're talking at least 40% and probably closer to 50% of this year's new RPG's are a little less than "new".

Are we happy that close to half of what we get this year is recycled? Miniatures games have some of this disease, boardgames seem to have far less, and videogames may be worse given the numbers of 2's and 3's after the big videogame releases of 2016. At least videogames have the technology factor to consider. Miniatures and boardgames have some competitive elements to consider. But why do RPG's, where the rules matter the least of all of these - in theory - seem to be on an edition treadmill to this degree?

Settings I sort of get: license expires, new company acquires it, wants to do their own thing. They almost have to, because they probably do not have the rights to the old rules. I think it would be pretty cool though if upon acquiring the Trek license Modiphius had said "yeah we're going to use the old FASA mechanics, updated to include all eras of the show." It is extremely unlikely that something like that will happen without the purchase of some old rights or even companies, but it would be a lot more fun.

For game systems that are with the same company it's less understandable. I don't care about the money so much these days as the sheer hassle factor. Oh look "Hammer of Beethoven" is launching a 3rd edition next year. That means for the third time I'll get to buy "State of the Art:1800", "Composers and Combatants 1, 2, & 3", and "Complete Piano Catalog". I'll also get to learn a set of slightly changed mechanics and sound like I've gone senile when I can't remember how the mechanics of the "composing showdown challenge" work in this edition vs. the first or second. Instead of walking the same ground over again maybe we could do something similar but new. Maybe the world is ready for "Swords of Shakespeare", by the people who brought you  "Hammer of Beethoven". Focus on it for a while and cut the release schedule down for HoB while you crank out SoS.

This is one reason I think Starfinder is a good idea. We have a lot of Pathfinder. We don't need Pathfinder 2 or 4 or whatever you want to call it. Try something similar, or related, but different enough that it's not a reboot. "Complimentary to" is a concept I'm a lot more interested in getting behind than "Replacement for".

Grousing aside what am I most looking forward to this year? As far as complete games:


Honorable Mention: The next edition of Runequest. Reading through the old RQ2 material from that Kickstarter has been a lot of fun and with a lot of the old Chaosium crew reuniting to do a new edition I think it could be a lot of fun. While it's technically the 7th edition of the game it's the 4th by Chaosium so they're calling it "RQ4" last I heard.

As far as books for games I already have:
So I do have some interest in the new stuff. I hope it's a good year for all of us.
Posted by Blacksteel at 12:00 PM

All I know is that I would pay good money for Hammers of Beethoven.

Seriously. Your Hammers of Beethoven idea sounds cooler than 90% of this list.

Yeah, I'm excited about Star Trek Adventures because I love Star Trek, and I'm interested in V&V 3.0 because of Nostalgia, but other than those...nothing is a must have.

I've gotten to the point where I just can't spend money on another edition of a game I'm already playing that works just fine, and I've never been one to buy games I know I'm not going to use.

Tales from the Loop looks very interesting, and is super-tempting, but will it get played?