Something New for Monday: Savage Rifts - The Books! 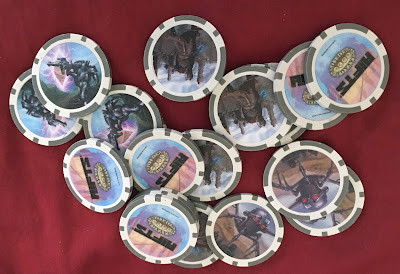 The physical copies of the Savage Worlds Rifts books are finally here and I am completely happy with them at this point, that "point" being holding and reading them but not using them in the heat of play. In the kickstarter I went for the hardback versions of the main books because most of my recent Savage Worlds books have been hardcovers. Beyond this ... 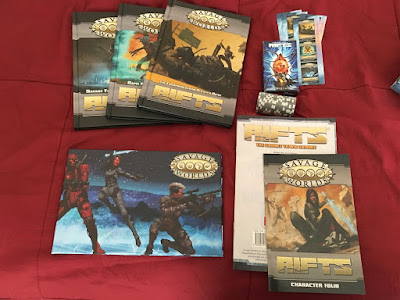 Part of the fun with Savage Worlds is the physical part of the game. Props and handouts are nothing new in RPGs but this game makes physical items, beyond just dice, a part of play and it's another opportunity for reinforcing the genre or setting. Poker chips for Deadlands, bullets for Weird Wars, coins for fantasy games, and specially chosen decks of cards can add just a little bit more immersion to the game. Hopefully these will add a little something when I get to run this one.

Beyond the physical elements I thought I would share some thoughts on the content as well. Between the Player's guide, the GM's guide, and the Foes book the authors do a really good job of covering the setting and providing the tools you need to run and play the game. Experience shows, and presenting a game that is clearly made to be played is a big improvement over a lot of games that to me look more like they are meant to be read. Things like mentioning that class X has a power or piece of gear in the class description only to find no mention of it in the relevant section, talking about certain groups or monsters as common opposition within the setting only to leave them out of the monster section, and describing common but impactful elements of a setting then failing to describe any mechanics for them - these are all common but aggravating flaws in new RPG's in my experience and I am not seeing any of that here. It's written to be used by your players, and there's a lot of common sense. Mechanics for Ley Lines!  Tables for what happens when a rift opens up! "Monster" entries for all of the PC types like Borgs and Juicers and Glitter Boys! A discussion of how money works in Rifts! These are all things that help a GM describe and administer a world as the players start moving through it! Again I haven't run this version yet but I am seeing a lot of those things that came up in Rifts specifically years ago and that come up in games in general covered in the actual game text here.

A few things I am not overly thrilled about:
Honestly these are minor complaints. The whole game is a triumph in design, execution, and inter-company cooperation. It looks great and I can't wait to play it.
Posted by Blacksteel at 2:13 PM