I saw something online and it immediately called out to me as a nifty item to have for my Deadlands stuff: 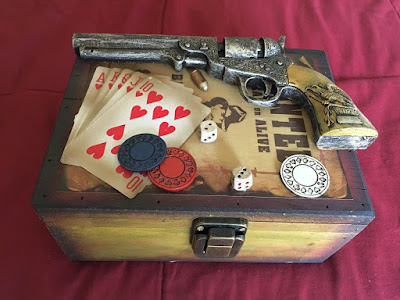 Short of a bloody handprint I don't think there's anything else you could add to make that more Deadlands. I've been fiddling around with the game for close to 20 years now and I have no plans to give it up so I figured I could afford to go sideways instead of getting more books.

My second thought was "ok how can I use it?" - or really, "how can I justify buying it right now"? I do have some cards I plan to use only for Deadlands, and I was looking at some dice for it and I was going to get a new dice bag for those and, well ... 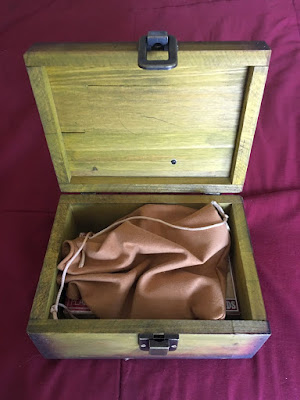 There's plenty of room in ti for some cards and a dice bag. 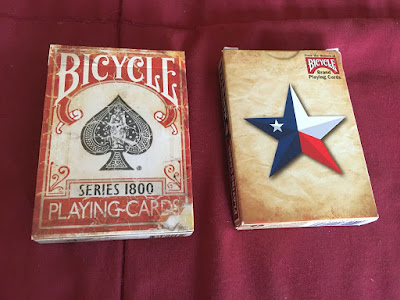 I showed the Texas Star deck in a prior post but the 1800 deck is new. 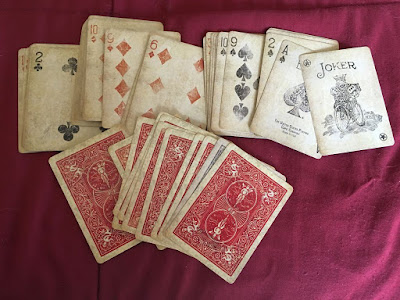 I really like that look. That's my main deck for Deadlands now. 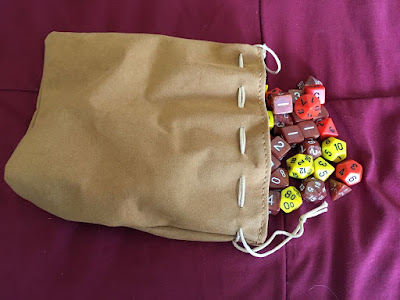 Dicebags: I've only used a few over the years - for the longest time my D&D dice traveled in an index card file box  - but I thought a leather/rawhide//buckskin look fit this game pretty well and it's big enough to hold quite a few dice. The best thing about it is that if it gets dirty/sweaty/grimy over the years it only looks that much more appropriate!

Dice: I co-opted the orange and yellow dice from my pile of Marvel Heroic dice, then added in the copper-colored set. The color choices are a nod to all of those blazing orange and yellow covers and boxes sitting behind me when I run the game. When I think "Deadlands" those are the colors associated with it in my head. 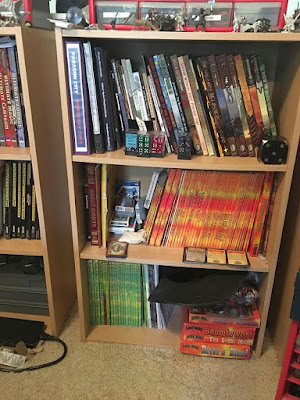 Originally I had thought I would keep bennies in the box too but bennies for Deadlands are poker chips and they live in a cowboy hat (lower right in the pic above). We throw it out on the table and use as the fate pot for the game. So no chips in the box.

So that's my little detour into useless gaming crap that you really do not need. I justify it all in the name of "atmosphere" and ... because I just like it. I suspect my teenage self would have looked at it and said "sure, that's cool and all - does it mean you've bought all the games then?" Well no, let's not get silly. I probably could have bought another game book or three instead of getting the box, the cards, the bag, and the dice. Sometimes though it's about making the games you already have better in some way other than more books. Sometimes it's just because it's cool.
Posted by Blacksteel at 12:17 PM