Wrath of the Righteous - Session 6a: Into the Ruins 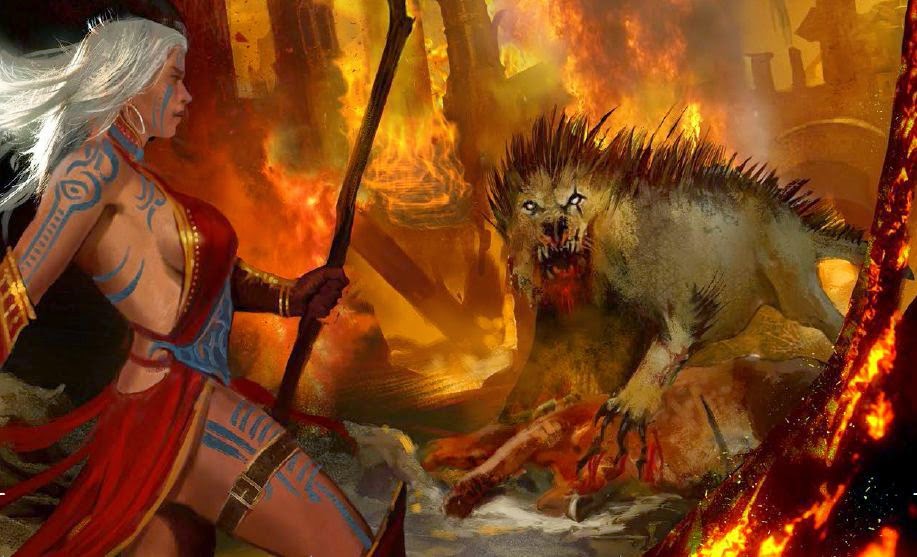 Moving into what's left of Kenabres the group discusses priorities:
The heroes, having only recently arrived in the city, have no particular attachment to any person or place though there is discussion about heading for a temple or one of the guard stations. They reach no consensus but decide to seek better shelter in the city and scout things out.

Other eyes are watching - as the group moves along an open stretch of road, a flock of fiendish vultures descends and attacks! In the fight Arken's warhorse trots up, seemingly in fine shape - what a stroke of luck! The vultures are dispatched, and the group decides to look for citizens to find out what has happened in the past few days since they fell into the undercity.

Pressing on, they soon see a small tailor's shop that looks largely intact though there is the sound of smashing coming from inside the wide-open front door. Investigating, the team sees a man-sized ratlike demon tearing the place up. Relyn and Arken are having none of that so they charge in and take out some anger on the creature, avoiding it's nasty claws and slaying it with no mercy.

From a back room come the shopkeepers, a married couple named Belthis and Neera. They are extremely grateful for the party's rescue and offer to share food and news if the group will spend the night. This seems like a great idea to our heroes and they pass their first night on the surface catching up on recent events.

During the night they learn much - the Kenabres wardstone has been destroyed, the Kite, the fortress that held it, has also been destroyed, cultists came out of the woodwork, some of the crusaders have gone mad, there are demonic bugs all over the city, many people have been possessed, and the water may have been poisoned. The one hopeful bit of rumor is that Queen Galfrey is on the way at the head of an army but no one knows when they will arrive.

The next morning the heroes decide to head for the Blackwing Librarium. Aravashnial describes it as a center of arcane learning for demon hunters and the others back him up. It's probably the closest of the several potential destinations so they might as well head there first.

Belthis and Neera have also come the realization that they cannot stay in the shop any longer so they gather up their things and prepare to leave with the party.

Leading this rag-tag fugitive band of refugees, the group comes across a group of Baphomet cultists - a familiar sight from below -  about to sacrifice a man in broad daylight. Without hesitation the heroes attack. Graiden uses sleep magic on three of them, Relyn engages another, and Arken finally gets to unleash a mounted charge on another, killing him in a single sweep. The victim turns out to be a ranger from Mendev, scouting through the ruins to try and determine who is left. Reclaiming his gear from nearby, he joins the group figuring that Blackwing is as likely a place as any to have survived.

Pressing on, the party makes its way to what was once the famous Blackwing Librarium. It now lies in ruins. From the open front door a voice bellows loudly "... stack the damn books higher!" It does not look good ...

DM Notes: With a small group of players, any absence is felt keenly. Dave and Red both had upcoming (and past) schedule conflicts so Blaster made a second character, a ranger. This also seemed like a good opportunity to work in the cavalier's horse, so both showed up this session.

This was the beginning of an especially fun part of the campaign as the ruined city is pretty much a sandbox - the party can go wherever they wish. The NPC's each have an agenda but the players don't have to accommodate it. It's a refreshing change after the relatively limited set of choices in escaping from below. A city just destroyed by demons is a pretty interesting type of post-apocalyptic setting and I hope they enjoyed it as much as I did.

A word on structure: normally I try to write one recap per session but a lot went on in sessions 5-6-7 so I'm splitting some of them up into multiple entries. More to come!
Posted by Blacksteel at 12:00 PM