Wrath of the Righteous - Session 5: Out of the Darkness

Checking one last door in the upper level the party finds a sort of open well leading to an underground river. Figuring there might be something interesting, they decide to climb down. Poking around down there they discover a secret door that leads to a hidden room off the river. Webs? No problem! Dust? No problem! Old wooden chest against one wall? No problem! Hidden spiked pit trap? Problem! Well, not so much as the clumsy cavalier only takes a few scratches, then it's time to escape with the loot. We'll call that time "fun with climb checks" as armor and the loot combined to make for some entertaining moments in what seemed like a pretty easy task initially.

The pair of cultists that almost laid the cavalier low back in Session #3 were actually guarding a door in the ceiling. Last time The cleric and the NPC's (the blind, the gimpy, and the greedy) had stayed back to watch it while the rest of the party explored the rest of the rooms on their level. Now, it was time to climb the iron ladder on the wall and see what was up there.

First up was a rats' nest inhabited by a trio of giant rats which were dispatched with very little effort.

Next was another guard post in front of a rusted iron door guarded by the two biggest mongrelmen they had yet encountered, looking even more mutated than the others. Alerted by the final squeaks of the rats, they were ready for the heroes. The paladin and cavalier worked well as a team, moving up together and attacking the same target. The sorcerer and the wizard did likewise. The cleric was still finding his feet and when he tried to maneuver around one of the mutants and paid for it when the beast clocked him and dropped him in one solid hit. He survived, but he wasn't happy about the skirmish. Examining the area, the party realizes it's set up more to defend against something coming through the door rather than something coming at the door from this side. Unsure of what lies beyond but undeterred regardless, they open it.

With a shriek of rusted hinges the portal opens and beyond it the heroes see a large worked stone chamber, arches soaring overhead at the edges of the torchlight. This may be part of the foundations of the city - progress! There is also newer, cruder work in the center of the room, limiting access. It might have started out as a defensive wall but is now the outside of a maze, presumably constructed by the mutants as a defense against intruders. They move in, somewhat excited to be visibly closer to the surface but also wary of what those guards were guarding against ...

They quickly encountered the inhabitants of the maze - a pair of smallish apelike demonic beings who charged them with weird hooting noises. They were not physically terrifying but they were unnaturally tough, and the rude noises and nauseating clouds they created were a step beyond the mere visual weirdness of the mongrelmen. One of them cast some kind of foul spell that made Arken run in fear, though Phalcon managed to calm him down and return him to the fight. In the end they slew both creatures with no serious harm to themselves. 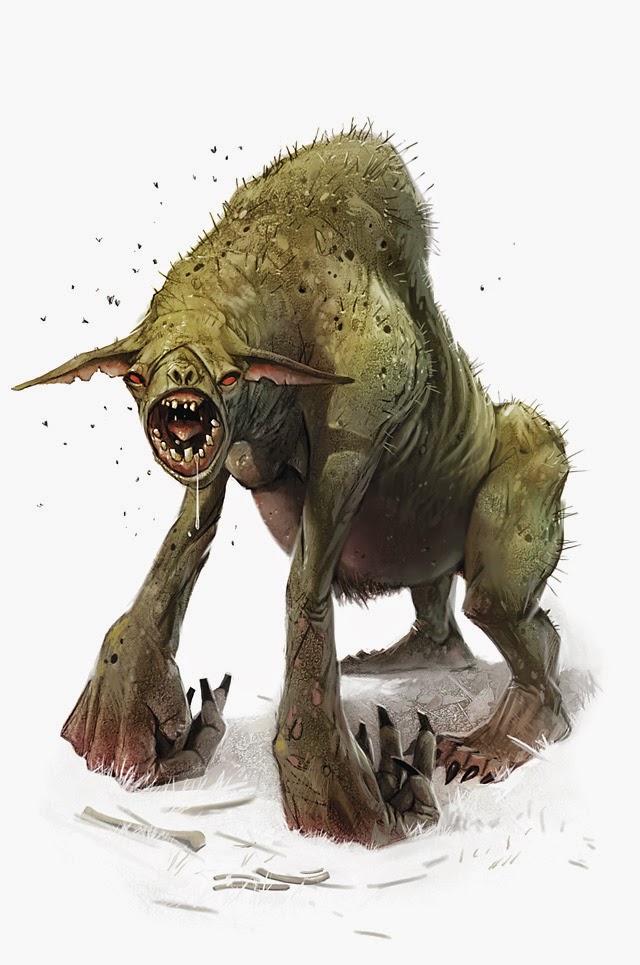 With the demonic stinkbeasts slain, the heroes scout ahead and find a series of tunnels leading up. They return to the guard room and bring up the Anevia, Aravashnial, and Horgus. Pressing forward again they make their way upwards and eventually emerge from the city sewers to breathe clean, fresh, air once again as the sun rises over the smoking ruin of the crusader city of Kenabres. They are out, but maybe they were better off below ...

DM Notes: Figuring out the logistics of getting a couple of characters down a rope and into a secret room had a very old-school feel to it, despite the plentiful use of skill checks. The pit trap was pretty old school too, except I rolled a "1" for the falling damage, a "1" for the number of spikes, and followed that with a "1" for the actual spike damage, for absolute minimum possible damage. Sometimes the fun just drains away as the rolls come up.

The rats were not even a challenge as the first 3 characters up the ladder killed one each. For the guards though I used "advanced" mongrelmen and those proved to be a bit tougher, enough to make for a more interesting fight. The barricades used at all the guardposts in this area required a little more thought and maneuvering from the party  than the usual charge-hit-kill you might see in an otherwise empty room.

Dretches in a confined space were fun. They have a lot of resistances so they don't croak on the first hit or two, and they have fun little spells like cause fear and stinking cloud. They tend to be minions or nuisance monsters at higher levels but at 2nd they were a nice little challenge.

At the end of this session our heroes are now out of the dungeon and back in the city. The "intro" part of the adventure is over and the somewhat sandboxy part begins as they make their way through a ruined city trying to figure out where to go and what to do, both for themselves and with this group of hangers-on they've picked up along the way.
Posted by Blacksteel at 12:00 PM