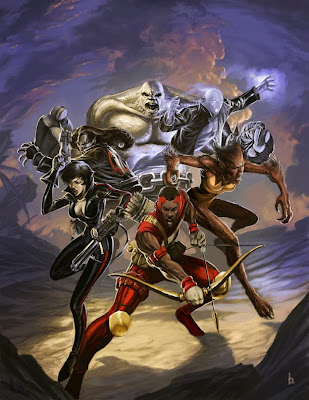 It's been pretty D&D-intensive around here lately with the combination of Next, Pathfinder, and the ongoing 4E game - and there is more coming - but I wanted to talk about the other stuff.

The one non-D&D thing we have played semi-regularly (though there's been a gap for the last month or so) is Mutants and Masterminds. It's been all 3E this year but despite my proclamation a few months back I'm back to leaning towards running a 2E game because I sat down and worked out an outline using the published material I have and realized I could probably run for a year on it alone. Given that pile of plots, stats, and maps, and the near-zero prep time, why am I not running this?

I have a concept in mind I am calling "Freedom City: Year One" which is comic book terms would be following the adventures of a group of brand new heroes who all appear in the same one-year period and begin careers as superheroes in the shadow of the well-established and well-known Freedom League. No, it's not super-original but it is more specific "concept-wise as opposed to my usual "make up some heroes and we'll figure it out" approach. More on that tomorrow. In the meantime, yes, I am working on figuring out a timeslot to run this alongside my "dungeon overload" of late 2013.
Posted by Blacksteel at 12:00 PM