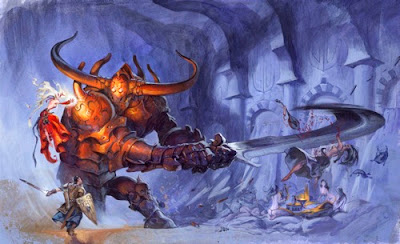 You'd think after playing this game for multiple decades there wouldn't be much left that I didn't already have, but they keep ... making ... more ... stuff! I manage to resist the collector/completist bug most of the time (I don't have "everything" for the first three editions of D&D) but I do like to have "main" books for any game I am attempting to run. To sort things out:


I'm probably going to stop worrying about the other stuff - our "pure" basic game and our 4E ToEE, and even Stonehell - until the boys ask me to run them again. I may take a shot at converting Stonehell to Next but that will probably not happen in the immediate future. The others aren't going anywhere and can be picked up anytime.
Posted by Blacksteel at 12:00 PM