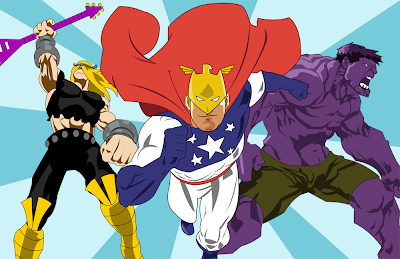 So, there's been a lot of superhero stuff on the blog lately, and not much D&D or 40K or any of that other stuff. What the heck is going on? Well, I write here mainly for myself, so even though the blog has kind of a D&D look to it it's not always about D&D.

The theme I chose for the April A to Z thing pretty much forced me to live in my ICONS, M&M, and Marvel rule books for the month and that tends to focus my "gaming head" in to that space. With another summer of superhero movies coming and new Marvel and M&M campaigns kicked off with the Apprentices the superhero thing will continue to be a major player here.

There are still several D&D campaigns going on around the house - 4E and Labyrinth Lord. I am still working on session recaps for the main game and I will post them up as I get them done. Still not terribly interested in Next either other than following the design columns - and crossing my fingers and hoping that it ends up somewhere I like more than what I see right now.

The Warhammer side of things has been ... quiet. I'm not hearing much from the boys about it at all and there has not been a whole lot of painting either. I really thought with the new edition last summer we would be digging in deep by now but we really have not and I blame two things: Magic and Battletech.


So I'm no sure where 40K stands now. If a new Codex came out for any of their armies I'm sure it would jump start our scene but it's been a whole lot of "don't care" here lately.

With Red I'm also fighting the triple threat of job-girlfriend-driver's license and he was a pretty involved kid before all that. He was free exactly zero nights this weekend, which is perfectly normal for a teenage boy but does interfere with our games. Fortunately Apprentice Who is getting more interested in them and he has a few more years before any of this stuff will be a problem.

So to work around this (here's the practical part), I came up with a rotation that seems to be working for us now: When I have Blaster and Red available we play Stonehell (with 4E ToEE as a backup). When I have Blaster and Who available we play M&M (with old-school Marvel as a backup). When I have all 3 available we play New Marvel. Not sure about Red & Who because that doesn't come up a lot, but while writing this I asked them to figure out what they would like to play. Much discussion but no firm answers yet. One new wrinkle is that I picked up BESM a while back and gave it to him since it covers some ground he likes and he's talked about possibly running a game of some kind. We shall see.
Posted by Blacksteel at 12:00 PM