W is for Wizard of Wor 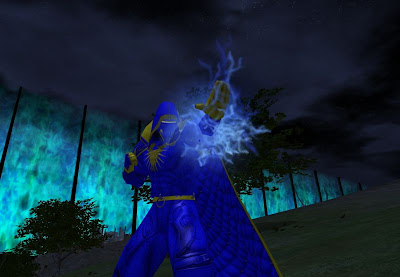 First Appearance
CoH periodically released new costume pieces and parts and full sets. One of them was magic-themed and of course this meant I needed a new character to try them out. Wiz went through several incarnations but one that stuck around was a Sonic/Dark Defender, mainly because it looked particularly "wizardy". I'm shallow like that sometimes. 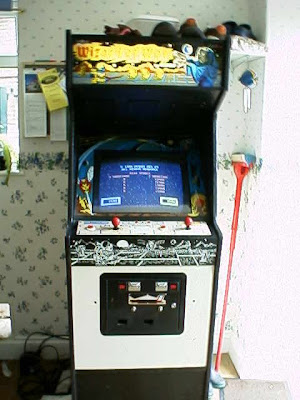 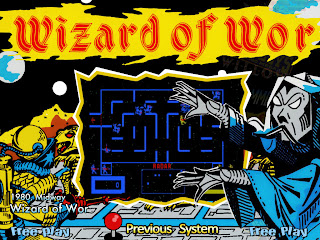 Yes, the old videdogame was in my head for some reason when I was working on him. Maybe it was the colors, I don't know. 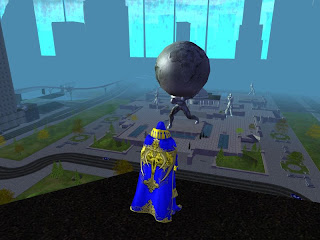 Origin
The Wizard of Wor was born on earth but was noticed by certain organizations as having high magical potential. Unfortunately for him he was not invited to attend a magical English secondary school. Instead he was kidnapped and raised on a distant world, a harsh, unforgiving place with a harsh unforgiving Master. As he passed various test over the years he was taught more powerful magic. Only the best could serve the Master of the place as his champion and lieutenant, and this decade of training would winnow a group of candidates down until only the strongest survived. He did, but instead of ascending to be the master's right hand he set off planted devices, self-destructs, and then cast a long-prepared spell to take him home. At the end though the Master caught him as the spell was completed and corrupted the final step. Instead of returning to Earth the turncoat was sent tumbling into another dimension.

It would be a long road home. The Wizard spent a year traveling various dimensions as he divined the correct path home, moving ever closer to his goal. Eventually he reached it, but he knew that agents of the master could still be watching for him. He created an identity-concealing costume, contacted some potential friends, and decided to begin a new life as a hero. This would give him a cover as "just another costumed do-gooder", allow him to watch for signs of the cult, make some new allies, and atone for the terrible things he had done during his training.

Personality
The Wizard of Wor stays hidden behind his mask and robes. His voice is modulated through his mask, concealing that as well. He is physically fit, athletic and energetic, and an experienced, dangerous physical combatant. He comes across as knowing a lot but saying little more than is needed to resolve the current situation. He doesn't have a lot to say unless educating an ally on a magical threat of some kind. He tends towards the grim, as he knows what is out there and how dangerous it can be, but he has occasional lighter moments where he can come across as more likable - there may still be a real person inside there. The Wizard has never been heard to laugh. He dreams of a day when the greatest magical threats to the world are destroyed and the Master is slain once and for all, when he can finally take off his mask.


Wizard of Wor for ICONS 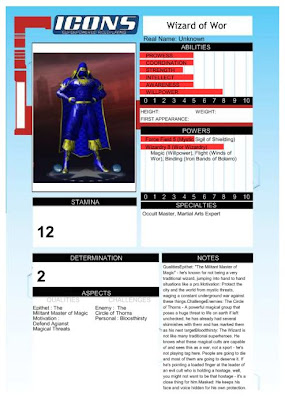 Powers:
Force Field 5  - Mystic Shield - Learned early and something he does without even thinking about it now

Qualities
Epithet: "The Militant Master of Magic" - he's known for not being a very traditional wizard, jumping into hand to hand situations like a pro.

Motivation: Protect the city and the world from mystic threats, waging a constant underground war against these things.

Challenge
Enemies: The Circle of Thorns - A powerful magical group that poses a huge threat to life on earth if left unchecked, he has already had several skirmishes with them and has marked them as his next target

Bloodthirsty: The Wizard is not like many traditional superheroes. He knows what these magical cults are capable of and sees this as a war, not a sport - he's not playing tag here. People are going to die and most of them are going to deserve it. If he's pointing a loaded finger at the leader of an evil cult who is holding a hostage, well, you might not want to be that hostage - it's a close thing for him.

Masked: He keeps his face and voice hidden for his own protection. Revealing them would potentially give his greatest enemy his location and make him more vulnerable to certain magical attacks. As no one has seen his face, no one can be 100% sure he is a male, or even human anymore.


Notes
What if Dr. Strange or Dr. Fate had the attitude of the Punisher? I wanted to ponder this and WW is the result. At 50 points he is remarkably cheap for what he can do. He has a fairly ferocious melee capability plus his Wizardry which makes him all kinds of flexible.

I kept his Force Field separate from his Wizardry because I wanted it to be a separate, instinctive thing. Even if his main magic is drained he could still put up his field. Looking at it from an efficiency point of view it could probably just be rolled into his Wizardry list replacing Flight which would give him another point of Determination but I'm leaving it the way I wrote it up here for now.

I also gave him Binding instead of Blast for his main ranged attack, mainly because it's more interesting. He can stunt into a blast if he just wants to blow things away, but the binding option lets him interrogate prisoners during or after a confrontation.

He will be burning Determination to do interesting things with his powers so it was important to me that he start with at least 2 points. Hopefully I have given him enough Challenges to gain some more and enough Qualities to spend them in fun ways. With his power level he can maintain up to 8 effects at a time so he has room to use those points.

Going back to the question above ... 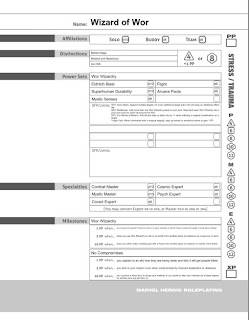 Notes
Most of Wor in MHR is Dr. Strange with some Punisher added in as well. His Milestones are a mix of the two, insuring the proper attitude. His Specialties are as well. His Powers are in a single set (as opposed to Strange's 3!) with lots of options for adding in multiple dice, stepping them up, or stepping them down, so he should still be fairly versatile. he is not intended to be as powerful as Strange, but is instead a combat-focused battle wizard. One set may be restrictive but I didn't want to load him down with a bunch of "magic items" to create another power set. I see him as reliant on his own abilities, using items temporarily at most, which would be covered by the asset creation rules. 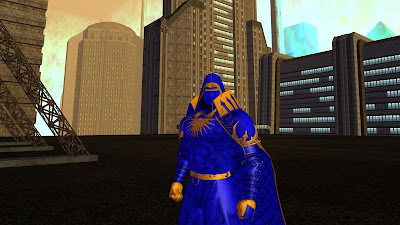 I might have to steal this guy someday and use him as a bad guy in my DCA/M&M3 game.

Thanks - I've thought about going back and adding a "Going Rogue" section to describe how to re-skin these guys as villains. I still may do it after we're done with April.