U is for UTINNI UTINNI! 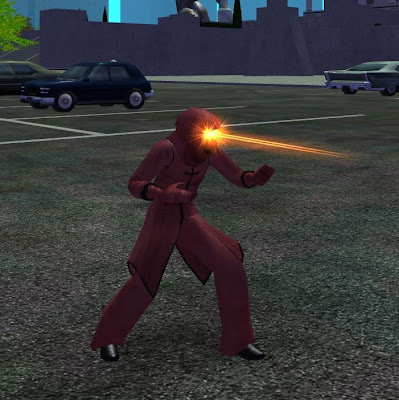 First Appearance
Well, it's not hard to see where the inspiration for this on came from. Let's just say I liked to challenge myself with the costume creator. He was a Traps/Electric Defender for those of you who played the game.

Origin
From the original bio: On his home planet UTINNI UTINNI was a shaman of his tribe. Unlike his tribemates, he was not content to stay in the desert his entire life, so he set out to explore the wider world. Several misunderstandings later he found himslef on a ship with a malfunctioning hyperdrive and despite his best efforts to fix it, things went a little plaid and he ended up on this planet. Fortunately his technology is as good as magic here so he decided to spend some time exploring before looking for a way home

One year later: He has become fascinated with the wild mix of technology found on this planet and going home is no longer a real priority. he is seeing things no other member of his tribe has seen, built new gadgets, made some new friends, and even become a hero to some non-tribesmen! This is a great place, and he intends to stay as long as he possibly can!

Personality
U-U is a member of a naturally inquisitive race, and he is a prime example of this tendency. He is also both fascinated by and incredibly adept with technology, more the practice than the theory. He is an eternal optimist, cheering up his companions with his antics and his knack for having just the right gear at just the right time. He is a constant scrounger, going through trash and excitedly running off towards any junkyard he might happen across. The upside is that he is an absolute genius when it comes to making devices that do impossible things. He's not big into theory, he just seems to make it work.  He's been compared to a living utility belt and though he didn't really get the reference it seemed like a compliment so he was happy. He's a big team player, aiding and supporting his friends.

One note: He does not speak English, or any other earth language. He understands it just fine, but his outward communications is "a bunch of jibber-jabber" to quote one teammate, and extensive use of emphatic  gesturing. He also frequently pulls out a portable holo-viewer to communicate things - a holo-picture is clearly worth at least a thousand words. Think Scotty & that fuzzy thing in the Star Trek reboot movie, or Chewie in the Star Wars movies - even without speaking a language they manage to get their point across. 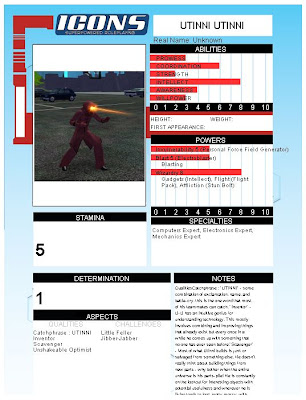 Attributes
Prowess: 3 (Typical) - He's a fixer, not a fighter
Coordination: 6 (Remarkable) - He is remarkably accurate
Strength: 2 (Poor) - He's the size of a human child and is not super-dense
Intellect: 8 (Amazing) - This is where he excels, even amongst his own kind
Awareness: 4 (Good) - "Kind of a skittish little feller ain't he?"
Willpower: 3 (Typical) - He has a hard time resisting his own bad habits

Powers:
Invulnerability 5 (Device) - Personal Force Field Generator - the first thing he built after seeing a super-battle and something he never leaves behind.

Blast 5 (Device) - Electroblaster! - the second thing he built after he realized people thought he would be an easy hostage

Wizardry 8 "Gadgets" - (Known powers Flight & Affliction)This is Int-based and reflects his constantly-carried array of knick-knacks, gizmos, and scrap devices that he somehow uses to do amazing things.

Qualities
Catchphrase : "UTINNI" - some combination of exclamation, name, and battle-cry, this is the one word that most of his teammates can catch.

"Inventor" - U-U has an intuitive genius for understanding technology. This mostly involves combining and improving things that already exist but every once in a while he comes up with something that no one has ever seen before.

"Scavenger" - Most of what Utinni builds is junk or salvaged from something else. He doesn't really think about building things from new parts - why bother when the entire universe is his parts-pile! He is constantly on the lookout for interesting objects with potential usefulness and wherever he is living tends to look pretty messy, with tools and parts everywhere.

"Optimist" - U-U loves the life he is living right now. Super-Earth is just the most interesting thing he can conceive and he can't get enough of it. Even while chained to a wall he can't help but communicate his excitement over those new stun blasters the guards used to knock them all out!

Challenges
"Little Feller" - Utinni is not a physically impressive specimen. In fact no one is really sure what is under those robes and what he looks like inside the hood. Regardless he's only about 3 feet tall and is somewhat fragile. This can be a hazard in the superhero game but he doesn't care.

"Jibber-Jabber" - As described above U-U does not speak any known earth language. He manages to communicate just fine most of the time, but every once in a while he hits a rough patch and just cannot get his idea across.

Notes: At 50 points UTINNI UTINNI is a pretty solid character with a lot of capabilities. That Stamina 5 though ... try not to get hit! I thought about folding his blast into his gadget power but it helps to have a solid offensive and defensive power outside of the wizardry to let you get truly creative - I hate seeing a great power like that spending 90% of it's time as offense or defense so I solve the problem by adding those first and separately. Determination is essential for whipping up new gadgets so I made sure U-U has a lot of ways to earn and spend that vital resource. If you need one more "Bad Luck" would not be totally out of line for him.

I also wanted to mix in a character that does not have outstanding physical stats. My brain tends to think of "4" as a good starting point for ICONS character stats (MSH's "Good") and a double-digit stamina as almost required, so it takes a little effort to go the other way and prove good stats are not a requirement - though maybe one really good stat is a requirement ...

My general take on things is that I have to be interested enough to be willing to play a particular character before I would bother sharing him online. I feel that way about UTINNI, 5 Stamina and all. 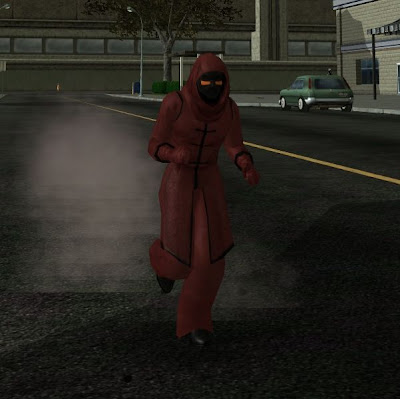 Now to mix things up a bit (hey, blame Disney): 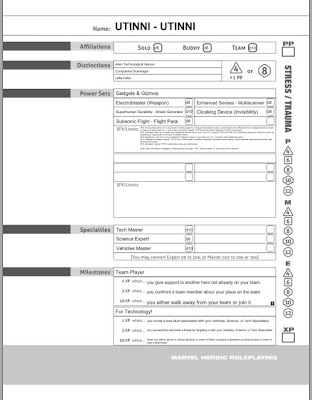 He only has the one Powerset but it's fairly diverse and has a lot of SFX designed to let him do interesting things with it:
Then he has the gear limit found on many characters.

His Milestones are the best I have right now. I think they could be refined further but I think these are a good start. His first is the team player set found on several heroes, again emphasizing his team-oriented attitude. His second is an adaptation of Mister Fantastic's "For Science" set in the basic book. I think it works but could be better. The biggest problem when it comes to milestones is that he doesn't have a family, he doesn't have a history of foes or of lovers so a lot of the more common sets aren't really open to him. Yellowjacket's "Maker" is close but I don't really see UTINNI building self-aware robots, much less debating them. Ms. Marvel's "Kree-Fueled Powerhouse" adapted to reflect brains over brawn might work but it was going to take more time.  I even considered Hercules' "Immortal Friendship" set with a few tweaks but the team player probably fits better right now.

I do like his outfit a lot! Very stylish :)

I love his name and that he shoots lasers from his eyes.

Thanks! He was fun then and I think he'd be cool now.