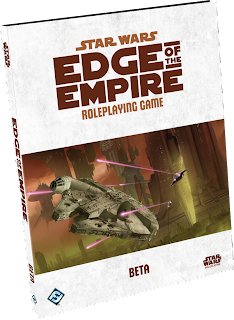 It's from Fantasy Flight

It's a Beta test.

Seriously. When did it become OK to charge people for beta testing? There used to be some kind of reward for being a PC game beta tester. Is this some kind of riff on the privilege of early access, like with an MMO game?


This limited edition, 224-page softcover rulebook provides you a chance to lead these galactic explorers. This is a complete and playable version of Star Wars: Edge of the Empire, and (compared to the final version) it excludes only art and certain thematic material.

So it's not really a test version? But then they have a section on submitting feedback, so it appears that maybe it is. After Pathfinder and D&D Next I would think that some kind of open beta would be the new hotness but I guess not. For a serious playtest effort though why make it a physical book and not a PDF? There can't be much of a secrecy element to it because once you pay for a book I don't think they can stick an NDA on top of it. It's a strange approach but who knows, maybe it will work for them.

It's also set in the Rebellion Era and will be in 3 books according to the description - one for smuggler types and the Rim, one about the war, and one about the Jedi. This independent-but-combinable approach is the same one they have taken with the 40K RPG system they publish and I suppose that's fine. I think the people most likely to play a new Star Wars RPG are the ones who played previous Star Wars RPG's and those games pretty much covered all possible character types right from the start, so this approach seems kind of limiting. At least that's my initial reaction to what I see on the screen.

Oh, last but not least - custom dice. Wonderful. Is the final game going to come in a box with those dice? Will there be enough for more than 1 player? If you're wondering what I mean then take a look at this - I assume WFRP is at least a partial template to what they're thinking. Core set at $99.95 including custom dice and cards that are required for play. I'm trying to stay open minded about this but it's very difficult. I have games that use custom dice - Heroquest, Memoir 44, and Command and Colors Ancients to name a few. All of them come in a box and none of them are truly RPG's. Remember d6 Star Wars? All I needed was a set of d6's. Remember d20 Star Wars? Even there all I needed was a standard set of RPG dice. Savage Worlds uses normal RPG dice and adds in a deck of normal playing cards - I'm all for trying out new mechanics but we're not talking d14's from Goodman Games here - they're likely special dice made only for this game. Plus, aren't we moving towards lighter mechanics in games? Less fiddly bits, more fast & furious? Just looking at M&M/DCA, ICONS, and Marvel Heroic as recent launches in one typically over-complicated genre I would say "YES", and if any game seemed to cry out for that type of mechanical approach isn't it Star Wars? Again I would say "YES"! That does not appear to be where this is headed though.


I'm sure more information will come out but I'm feeling disappointed about this. I'm still a little interested but I won't be lining up for a pay-access beta version of a game book, and I'm not thrilled by what I know right now about the approach. I guess we will see where it goes.
Posted by Blacksteel at 12:00 PM

Well from reading the FFG forums, the custom dice seem to be it, none of the cards and tokens from WH Fantasy. As to the pdf, that's all on Lucas, WOTC had the same issue. For some reason the folks over in Lucus world see a pdf of an rpg book as an electronic game, so it's an addition (supposedly substantially larger) license.

I'm feeling the same way, was hoping for something akin to the old d6 system my self. Though I knew that wouldn't actually happen.

When did it become OK to charge people for beta testing?

Ever read any first edition old World of Darkness book? ;-)

Mini - I can see that being an issue.

Theron - I could say the same thing about Shadowrun 1st edition and a few other games : )