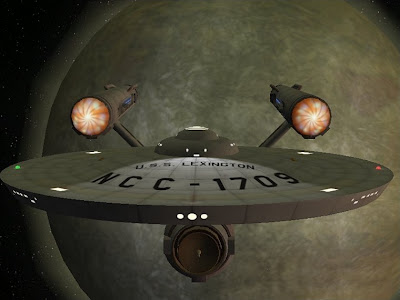 Barking Alien has been talking Trek this month and I've mostly kept my comments there but he hit a pressure point with this post and as my typing continued I decided that it belonged as a full-blown post here more than as a simple comment there.

I was fortunate enough to have the experience described in his entry - pretty much everything we did in the FASA Trek RPG was one long campaign. I rolled up a command officer and pretty quickly took command of the U.S.S. Lexington NCC-1709. That was pretty soon after the game was released, so call it 1982. We ran all over the Federation dealing with everything from Gorns to Orions to Klingons. We played through a few published adventures but it was mostly the GM's own ideas. We might go for several months without playing Trek, and then come back to it, then move on. Our friends made characters, lost characters, brought in new ones - looking back it was a lot like what I think that kind of life would be. My character was about the only constant, though our Vulcan chief engineer was around for most of the campaign too. 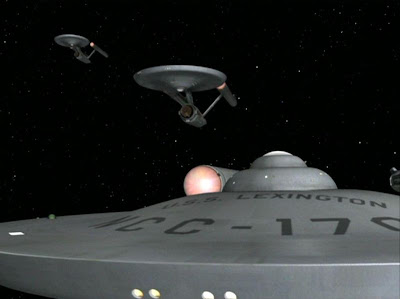 Eventually The Lex was used to test out an experimental sensor system which included fire control system upgrades as well. I think the original intent was to be more effective against Romulan cloaked ships (this was before Klingons were cloaking all the time) but we didn't go that route. We ended up in a tremendous fight against a Klingon task force - I don't remember the reason behind the fight but it was a big deal in the campaign universe - and though she survived the ship was in bad shape ("damn - we lived but look at this damage!") and was going to need a complete refit. This meant an upgrade to Enterprise class ("Yes!") and during the refit time  we were sent out on some intelligence type missions using a Mission class courier (that was in the basic game, I think).

The Mission was a fun little ship, more like a runabout than a "real" ship, but we focused on sneaky planetary adventures and had some fun. I'm pretty sure we were captured at least twice and had to escape. We knew the ship was temporary and our lack of attachment to it should be evident from my inability to remember its name.

We were all thrilled when the Lexington went back into service and our first mission, much like our first one ever, was to deal with a Gorn problem and the Lex quickly showed a couple of Gorn Battleships exactly what the pecking order was in this part of the galaxy. We later got involved with the Romulans and had to deal with competition more on our own level. 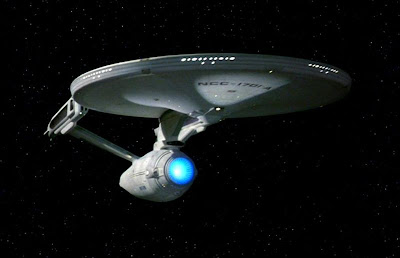 That campaign ran from about 1982 to about 1988 or so and the ship was always a big part of the "status" - ship good then "party" good. Ship torn up then there's a bunch of tension in the air. Awesome ship in drydock to get even more awesome = happy but stuck with crappy temp ship - no more smack-talking the local D-7 captains. Several of us were serious gear-heads back then so ship stats were something we pretty much had memorized anyway so keeping the hardware together was a high priority.

I have to say that looking back I was as happy with this campaign style, and this ship, and this arrangement for player participation as I have been with any of them. There was no set schedule and no set group of players. The GM came up with an idea, figured out who could play and when, and off we went. If you had a character, they were there. If you did not, then roll one up and they were newly-assigned to the ship. Prominent characters whose players were not available were working on other things or might even be on shore leave.

As far as the campaign itself we never decided that we were going to do things that way - it was just assumed that if we played Trek it was as the crew of the Lexington. The game wasn't tied to a particular character, or a particular group of specific characters. It wasn't even the 430 crewmen of the Lexington, because some of them might have moved on and some new ones might have joined since the last adventure, but setting it on a ship somehow gave the whole thing a continuity that a lot of other games lack.

I think it's a model that would work very well in the modern grown-ups-with-kids-and-jobs environment that many of us find ourselves in now. There's a touch of the open-table approach in there as well and it would be easy to make that a formal part of it without going to a full West Marches sandbox campaign, keeping the more traditional mission/episode style approach but still being able to accommodate a random-access player base and having a sense of continuity that makes it a memorable campaign years later.

Thanks for walking me down this road again BA, it's been awhile since I've thought about this aspect of it.
Posted by Blacksteel at 10:28 AM

You are quite welcome Blacksteel.

Thank you in turn for being interested enough in something I wrote to respond at length with a post of your own. That really makes me feel good.