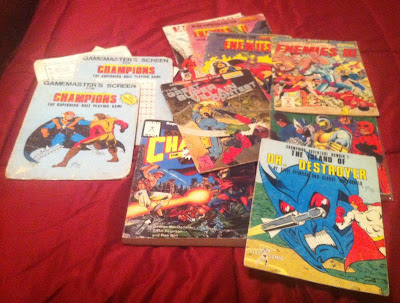 An eBay pickup, this one has duplicates of a few thing but that's the price you pay with these grab-bag type lots. The main initial attraction was another copy of the 4th edition Champions rules -  you can never have too many copies of the core rules floating around the table. There are some other tasty nuggets though:

Bring on the Unfortuates! I love those guys.

Of course, what I actually love is to modify and update them so they're not so lame.

Nice haul there my friend!

Old Champions is not terribly expensive so it's fun to hunt and easy enough to do online. I'm also still surprised sometimes at what turns up in the used bookstores around here - makes me wonder both where it's been hiding and where the owner was when I was trying to get a game together.

I played tons of Champions back in the day. I had the screen but not the other stuff (Enemies I maybe). They put my name in Champions II after I sent a handwritten letter describing some new powers (a multiman type power, immovability and some sort of poison IIRC). Because it was hand written, I don't have a copy.

Today it would have been a simple and quickly forgotten email but back then writing out all my ideas on paper mailing it made it one of my most memorable early gaming moments.

I would love to have that 2nd edition GM screen. I still play 2nd edition; 4th and up got more complicated than I really want.

Hey Hedge that's cool - I think feedback was a lot more personal back then.

Matt - keep an eye on ebay. My copy is so worn I'm not sure you could really play with it but I would bet there are others out there.

Finally found a 2nd edition GM screen and it's in
nice shape, too!