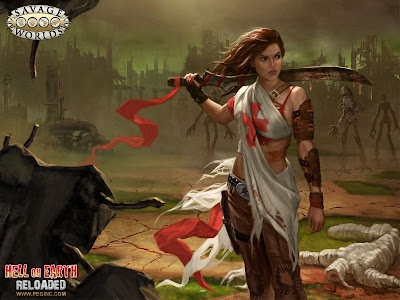 I had not been following this one as I wasn't sure it would ever come out - remember Savage Worlds came about about 9 years ago, Deadlands Reloaded 6 years ago - but it is out now in PDF form with hardcopy books soon to follow. Apparently there will be a separate plot point campaign book as well. I am a pretty happy camper as this is one of my favorites: some Gamma World, some Twilight 2000, some Supers, and of course some Deadlands, and it's all mixed together into a very cool package. The original system was pretty crunchy and as much as I liked it there were times when combat bogged down a bit. Now with full support for a Savage Worlds version I'm extremely interested and it's going on the "play" list for later this year - once the big summer project is over.

Posted by Blacksteel at 9:54 PM