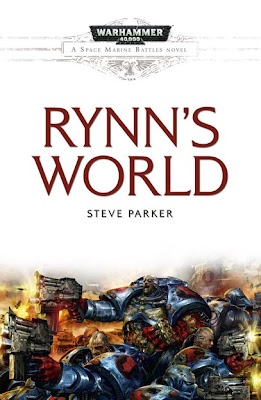 This is a pretty good one. It's a 40K Space Marine Novel, but it's not completely wrapped up in the glorious exploits of one legendary character. Nor is it littered with constant temptations by Chaos. Nor does it feature conspiracies by cultists, inquisitors, or traitors. Instead, it focuses on a legendary battle that's a straight up face-off between the Crimson Fists and an Ork invasion - of their homeworld.

One of the refreshing things about the book is that the marines begin as somewhat arrogant and detached from the world they call home, have their arrogance thrust into their face but are defiant nonetheless, then there is a terrible accident and the Fists are on their heels for the rest of the story, fighting to survive as a chapter. They have doubts, they have fears, they experience failure on a massive scale and in the most personal of ways.

Of course being marines they still fight on but there are some actual interesting debates over vengeance vs. duty, short term vs. long term, and the need to fight vs. the need to preserve the chapter for the future and the larger struggle to defend the imperium.  Don't get me wrong, there's no lack of skull-exploding bolter head-shots and powerfists crushing bodies in close combat but there are some interesting problems being faced alongside the action.

Additional freshness: the marines don't win every fight, even the on-screen ones. Their big heroes don't even win every fight. Near the end of the story the embarrassment of needing help to defend their own homeworld is even mentioned. Overall, most of this book covers a situation we don't see very often with space marine stories - desperation and failure. Some of the pivotal events are due to sheer bad luck and circumstance - again, not traitors or conspiracies or psykers or warpstorms or anything else. Longtime 40K players know all about rolling a "1" - sometimes random chance can have some pretty devastating consequences. Reading along as the marines are rocked back on their heels and struggling to keep it together makes for a pretty good story.
Posted by Blacksteel at 12:00 PM