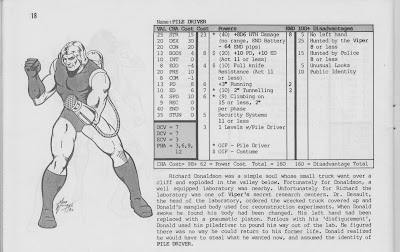 Let's be different tonight and start with the origin. Alright he's a normal guy that was a victim of Viper experimentation - simple and direct and that's fine. That costume is pretty dull though. I think he needs a ballcap to make it work. Or he needs to be more armored-looking with some obvious protection covering his arms and legs and torso all together. More mechanical, less "tights".

Looking at his stats, well, apparently having a jackhammer attached to your body raises your Dex and Con to maximum normal human because he's ended up with a 20 in each.His Str is up to a 25 which I will chalk up to working out a lot...assuming you can lift weights with only one hand. His Presence is up to a 20 as well which is pretty high for an otherwise "normal" guy but we can let that go.

Powers: Well the main thing here is the pile-drivin' hand which gives him a 13d6 punch. That's pretty good. It also gives him some tunnelling (appropriate) and climbing...somehow? I suppose he can chisel footholds out of the side of a building with his hand?

He also has a fairly tough costume that adds to his PD/ED some of the time and that gives him "Full Knife Resistance" which I believe is just Damage Resistance and that means it protects him against killing attacks as well. Security Systems skill, Running, and a combat level round out the list.

So can he take his own punch? Oh no - no no no. If he was to be mind-controlled and forced to ... hammer ...  himself (just move along wiseacres) he's going to hit for an average of 46 points of Stun and 13 Body. His normal defenses reduce this to 33 Stun and then he has a slightly better than 50-50 chance of reducing that to 23 Stun. So even if he makes his activation roll, he's still Stunned (23 Stun vs. a 20 Con) and reduced to 12 points of Stun. That means the second time he hits himself he is out cold, regardless of the defense roll, as it will likely exceed his Con and take his Stun down to 0. He's very much an eggshell armed with a ... jackhammer.

Disads include "No Left Hand" (very true), Hunted by Viper (I would change this to "Hunting Viper" myself but that came along a little later in he game), Hunted by Police (makes sense - he is a criminal), Unusual Looks (yeah), and Public Identity (alright). There's nothing outrageous here. He's only a 160 point character so these limitations cover everything and fit the concept.

How would I improve him? The game developed in many ways after this book was published. Raise him to 200 points and I might give him armor piercing or penetrating on his hammer-hand to make him more of a threat. An extra Stun multiplier might work too. If you want to get fancy then maybe a no-range Drain vs. Armor to represent him chiseling away at a target's defenses. Extra knockback could be fun too. His OCV/DCV and Spd are very low too so I would try to improve those as well. His defenses are pretty low but maybe that's part of his charm - he can't take much of a punch but you can't afford to let him get close either or he will hurt you. I suspect he would work best as part of a team where someone (like Bulldozer?) could serve as the brick or tank while Piledriver rushes in, hammer chattering, to deliver a knockout punch as a scrapper or striker.

So there he is. Not terrible, just kind of dull both in background and in powers. He just screams to be part of a team and that's where I would go with him. Put him together with Bulldozer as the tank, Piledriver as the HTH DPS guy (for you MMORPG'ers out there), maybe add in Sledge as...well whatever he's actually good at... and the next two characters (coming Wednesday and Thursday) for a ranged element and you have a nice mix if abilities with a "hardware" kind of theme that isn't a total ripoff of Marvel's Wrecking Crew. Maybe the team starts out with Sledge as its heavy hitter then replaces him with Piledriver, who is both mechanically and thematically a better implementation of the concept, leaving Sledge to go it alone. Could be a lot of fun in a campaign that deals with the low end of the super-criminal.
Posted by Blacksteel at 11:27 PM

I am loving these! More, more, more!

Glad you're enjoying them! I have 2 more then a fun little ender for Friday.

It is interesting to me that for a game so concerned with balance and socatering to gearheads, many of these early builds are pretty bad mechanically. Im still wondering how many of these were truly used in play and how many were put together in a rush for publication. Some of those disads are just crippling.

I have an idea for next week that will revisit them too, in a different way so the fun continues!