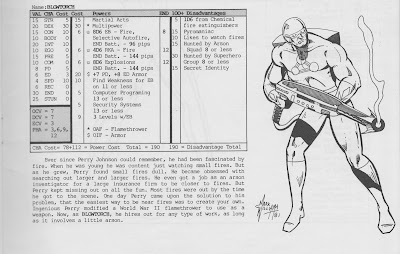 It's Blowtorch, an evil supervillain! With a flamethrower! What's his story? He's a pyromaniac! Who buys a flamethrower (maybe from illegal weapons dealer Emil Nelson) and starts committing crimes! That's it! No really - that's it for his backstory.  Nothing too terribly exciting there but it works. Costume-wise we're in for tights, goggles, and a flamethrower. Sounds about right.Not sure what that symbol is, but OK.

Stats: Look everything is a 20 or less! Finally a normal guy that is normal!

Powers: His Flamethrower is built as a multipower like Lazer's gun but it has 3 settings - Oh look: Autofire, an RKA, and an area effect attack - where have we heard that before? Nicely done. He also has some Armor, Martial Arts, Find Weakness, and some skills. There's really not much to complain about here. I always thought of a flamethrower as the perfect example of an "area effect - line" power but that's just me. Later versions of the game would also have more complete rules for setting things on fire but this is fine for now.

Disads: Pyro, likes to watch fires, hunted, hunted, secret ID - those are all fine. 1d6 from Fire Extinguishers is a little strange but at least it's thematic.

Mechanics? He has an 8d6 Eb which will average 28 Stun and 8 Body. He has total ED of 14 which means 14 Stun get through, leaving him with 11, so once again a second shot takes him down. He's close to Stunning himself there too with a slightly better roll. The RKA is worse as he only has 8 points of resistant ED. If he hits himself with that one he's going down in one shot, possibly for good. A punch from Ogre, our other measuring stick, would average 42 Stun and 12 Body. He can stop 15 which lets 27 through and renders him Stunned and Unconscious - not good.

So he's a guy with a flamethrower who has weak defenses. What do we do with him? We look him up in the 1989 4E version of the game and find: 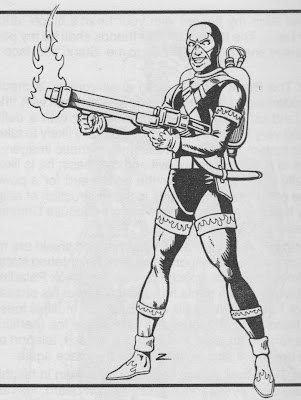 Well at least it doesn't say "Blowtorch" on the chest. It does have more of a fire theme so that's better. 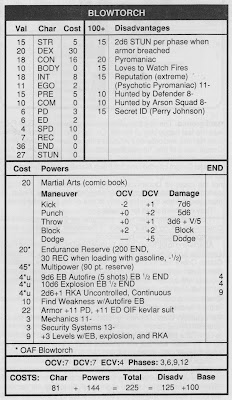 He has been changed up somewhat. His stats are still normal human though - good.

Powers? His Flamethrower still only has 3 options and they are the same but the damage numbers have been rebalanced to fit the 4E costs. His defenses are actually weaker and he can stll take himself out in 2 shots. Besides that he is nearly unchanged from the older version.

Disads are similar except for the Stun damage when his armor is "breached" - it's a kevlar suit. It doesn't appear to be sealed. Do they mean whenever it's penetrated by damage? That could hurt considering how low his defenses are already. It's not 2XStun but when you only have 17pts of defense throwing 2 more d6's in there could tip the balance. Plus, what is he, a reverse Mr. Freeze? It doesn't make a ton of sense but there it is.

He also makes the cut for 5th Edition: 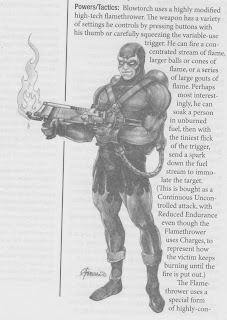 Again it doesn't look much like a comic book but it's ok by itself.

I don't have any more backstory ideas for him - he's a guy with a flamethrower. He's more of a GI Joe character than a traditional superhero. How do we make him appealing though? Add him to the team.

A team made up of Bulldozer, Sledge/Piledriver, Lazer, and Blowtorch could actually be kind of cool. You have a tank, a HTH striker, a ranged striker, and a ranged AOE guy. With the team concept in mind while tweaking them mechanically you could reinforce their strengths considerably and mitigate some weaknesses. Blowtorch could focus more on some AOE attacks (line, cone) to solidify his niche while keeping his Martial Arts moves to be able to assist in melee. Until he gets punched.

So there we go - a set of lamer villains that could be bonded together into something greater. Better, at least. Blowtorch is the last for the moment but I will be looking for others.
Posted by Blacksteel at 6:00 PM

As an old school Champions player (I remember when Mechanon didn't have Life Support), I'm really enjoying this series of articles.