Not a full-on superhero or villain but I felt they deserved to be included: 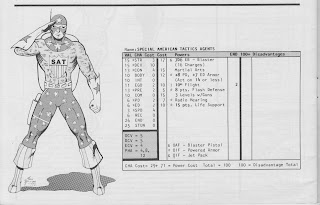 In this case I'm not concerned with stats or powers or disads but with costume...just look at it. Assuming the head and pants are blue, the torso might be red and the gloves and boots white. That's pretty colorful. The agents of Special American Tactics may be less concerned with camouflage than 40K Space Marines!

Part of me thinks there's some awesome here (are those boots actually striped?) but mostly it looks like way too much costume for an agent. It is impressive though.

Anyway, that's all for now.
Posted by Blacksteel at 6:00 PM