V is for: Villains and Vigilantes!

Another member of the Early Supers Club, V&V is well-remembered by many people as a fun game. I first became aware of it because of the ads in Dragon magazine that included a complete character in each one. They were cool - see: 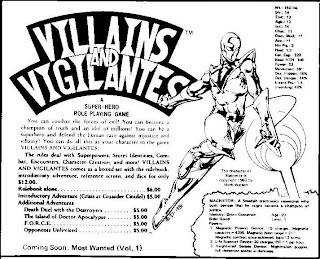 Just seeing that made me want to start playing a superhero game and I still think they're cool. Imagine if you could do something similar in a banner ad today - a fully-stated character! I think that ICONS could at least pull that off. I liked the front cover too 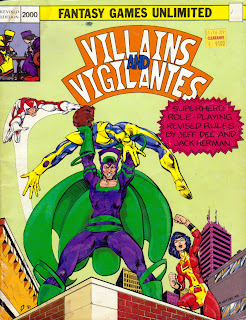 I know who the villain is! Because in those days only villains threw people off of buildings! I think the girl in red must be a villain too because a) the title is Villainssssss with an S implying more than one and b) It looks like she is cheering him on. The back cover was awesome too: 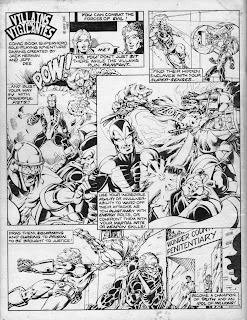 I love that "Me?" panel. "Yes you, you pansie! Go get your big boy pants on and let's go stomp some criminals!"
Anyway I haven't talked much about V&V before but I did play it. Some. My friends and I didn't acquire it until 1983 or 84 and we had already discovered Champions by then. Frankly, after a year or two of Champions V&V seemed like a step back. We liked rolling for stats just fine since that's how almost every other game in existence back then did it. We could even tolerate rolling for powers because we did it in Gamma World too but it made more sense there as they were mutations, not superpowers. So while we were OK with the mechanics, they just seemed very limiting next to Champs. Then about a year later Marvel Super Heroes came out and blew it away for good. Between MSH and Champions, we didn't need another superhero game and really wouldn't play one for the rest of the 80's and even the 90's.
Bashing aside we did play some V&V and I still have two of my character sheets from that time. 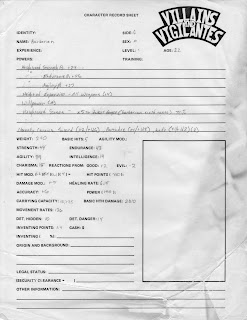 Barbarian* was a result of random rolls and the fact that I was playing my AD&D barbarian a lot right around the time I rolled him up. I am fairly sure that our DM let us have at least one reroll or pick-your-power option because that's a fairly cohesive set of powers. In the spirit of 4d6-drop-the-lowest we would sometimes allow an extra roll or two then pick the actual number of powers that best fit into something that made sense. Even with that fudge these were still very much "roll 'em up then figure out a concept", rather than the more common practice now of "concept then mechanics".
I don't remember much about the mechanics of the game but being able to carry over 5 tons is pretty impressive. I do remember thinking that if my D&D barbarian was like Conan then this one was going to be like Thundarr. He was suspicious of magic and tended to call mentalists and anyone wearing a robe a "Wizard". I think I played him as pretty much Thundarr pulled back through time which was fun then - and might be fun now too - and although he didn't adventure long he was fun while the game lasted. 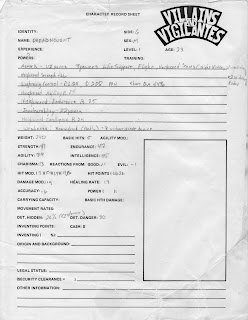 The second character is DREADNOUGHT according to my sheet up there and looking at his powers I may have found the unremembered genesis of Aluminum Man! Armor, flight, lightning control - wow that does look familiar! He was clearly more of a traditional power armor guy but many of the elements are there for his later incarnation. Notice there isn't a lot of categorizing whether it's a device or a focus or mechanical effects for when he's out of the armor - we didn't really care about rules for that stuff back then. If he's out of the armor when a fight starts he's going to run away from the fight until he can get into his armor then he's going to join in  - DUH! We also didn't worry too much about origin stories back then - he was a guy who built some armor then went out to fight crime! I think I used an illustration from Champions for him as it was much better than anything I could draw. Dig, dig, dig - ah here it is! 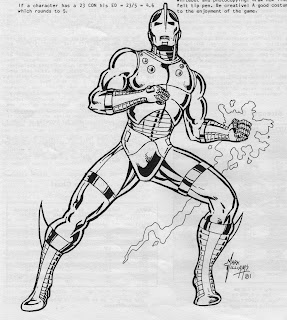 Yeah! That guy! That guy is ready to kick somebody's ace! I still like that picture. I saw him as completely chromed out, with some black stripes and and a crackling blue-white electo-punch.
Anyway we played for a year or two on and off running a session here and a session there in between AD&D, Champions, Gamma World, and some Traveller and Star Frontiers. I would guess we had less than 20 runs altogether in that time so it was not a major part of the rotation. We didn't use any published modules for it other than the one that came in the box, Crisis at Crusader Citadel, and I don't remember much about it . Most of what we did was homebrewed - stopping bank robberies and the like. I was definitely a "Champions Guy" and then once Marvel came out we adopted it as our second string/fast play game and V&V just drifted down the list of priorities. It wasn't a bad game it just wasn't better than the other options for what we wanted to do. Plus it wasn't exactly rules-light. Flipping through it now almost every page has a table on it, many have more than one. Some of them are probably set up tables you look up once when you acquire a power and then write it on your sheet but combat is all table-based. That said it was a pretty complete supers game in 48 pages so it was nowhere near the massive volumes we get today. 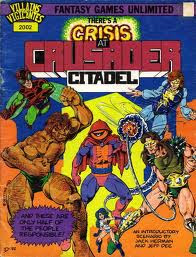 That's about all I have to say about V&V. I keep two copies of the rules on the shelf but they haven't been used anytime recently. I flipped through them and thought about getting them out with the apprentices but I realized I wasn't all that attached to the system and I would rather use that time to play something I liked better, whether it was MSH or M&M. While a retro weekend sounds like fun, I don't remember much about the rules either so it would involve a lot of re-learning  the system so I decided I would rather play something I already knew. It is only 48 pages though, and I do have some published adventures for it. Hmmmm. It still might happen as a one-off, we will have to see.
If you're interested the game's creators have reacquired control over the game and are supporting it and preparing new material for it here. It's not dead, even if it was on life support for a long time, and that's a good thing.
* that interesting pattern on the lower right tells me that this sheet was sticking out of a folder in my milk crate selves when I had a fire in the 90's. The smoke did interesting things to the books and papers that survived, like that little pattern. At least after 15 years or so they have stopped smelling like smoke - finally.
Posted by Blacksteel at 12:00 PM

Many fond memories of V&V. One of the things we have discussed over the years is the names of the characters in that book. Many are listed in the front of the book, and after frequenting V&V forums, I've managed to learn a little about some of them. Turns out a lot of our guesses were wrong about their names and powers.

The characters on the front cover are Blastar (guy getting thrown), Space Racer (flying guy), Skylark (the gal), and the villain is Omni-Primus. It's nice to finally know who all of them are! ;)

I'm a big fan of V&V from waaay back. It was sort of the first game I bought with my own money (actually I split the cost with a friend).

My buddy Joe found a note book of mine from the early eighties while cleaning out some boxes in his parents' apartment with a bunch of character ideas and other stuff in it.

I noticed you're already on V. I assume you'll be finishing out the month with the secret letters of the English alphabet given to us by the Mind Wizard of Baltrion Zeta II. They're awesome but that one half-vowel causes me nosebleeds.

BA: You should put some of those old characters up or maybe try updating them to M&M3 and posting them. I'm having a lot of fun roaming through my old character sheets this month.

Also, To spare your delicate constitution and since I am a little ahead of the game I may well take this weekend off from the Alphabet Game.