U is for Uberman!

Not a lot of "U" characters here but I do have one I can share. It's another riff on an existing theme/hero so I may not score a lot of points for originality, but here it si:

I give you Uberman: 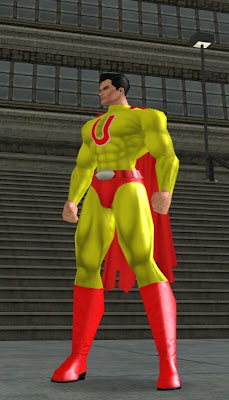 Hans and Olga Krupp found the tiny baby, hid his spaceship in their training facility, and named him Karl. Karl Krupp grew up with an incredibly intense Olympic class training program for his whole life, parented by two hyper-competitive gold medalists. Though it quickly became clear that his abilities went way beyond human norms and that he would never be allowed to compete for medals, the training continued as his parents drove him to be the absolute best in the world at everything - who cares about medals if you can say you're the strongest man on earth... or the fastest? He has been raised to become the supreme athlete, the absolute tip top peak of physical conditioning, and he may well be the best.

When he realized that his abilities included near-immunity to harm he discussed becoming a hero as part of his training program but his parents would not hear of it. As time went on though, he was doing very well athletically but was not really making much to live on. Endorsements were rare and his team eventually discovered that it was because he was perceived as an arrogant, condescending jerk and very few businesses wanted to be associated with him. This was shocking to him and his family and caused some dissension within the close-knit family. Realizing that competition alone might not be everything, it was decided to have Karl start doing some community service and other charity work. This went alright but seemed like a waste of many of his talents. There was also little publicity in these local activities. Karl was convinced that he could be a superhero and he was also beginning to crave a chance to explore the world on his own. Soon enough Hans and Olga relented. Olga made a uniform from materials in his spaceship and he took to the skies as a hero for the first time..

His travels soon took him to America where he was dubbed the Unearthly Uberman by the media. Karl feels like he has found a niche for himself as a superhero and plans to stay for quite a while. He trains rigorously as he considers this the biggest competition of his life, and keeps in touch with his parents. He can still come across as arrogant much of the time, but he is learning and being around other people with extraordinary abilities has brought his overconfidence down to at least superhuman levels. He still fears just about nothing and expects to vanquish every foe he faces. This helps when working with a team as he is a rock of confidence, but it goes badly on those rare times when he is wrong. 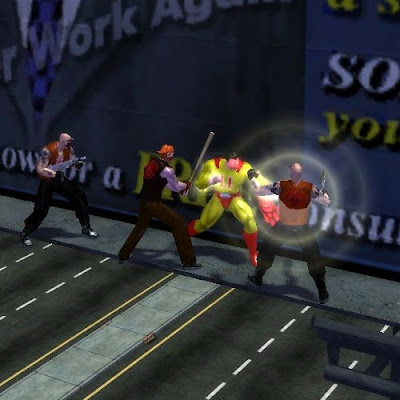 The Unearthly Uberman for Mutants and Masterminds 3E: This one is pretty easy - he's a Paragon, straight out of the book. Considering his upbringing I would consider some small adjustments:


So that's Uberman. For the writeup he's more of an example of how to customize a template for an RPG to fit a concept, although it does help that they are based off of the same red-caped ancestor. In this case I have a concept and I'm bending the numbers to fit the concept. That's one of the fun things about supers and point-build games in general, is that you can make the character fit a concept exactly. If you can't come up with a concept then sometimes a template, a sample character, or a randomly rolled character can inspire you, which turns into a case of the concept bending to fit the numbers! There is no right way to do this - enjoy it! A chance to make up your own superhero and play him (or her) in a campaign is a rare and special thing so get into it! It's a genre that welcomes everything from  primary-colored spandex-clad types spouting cheesy catchphrases to grim servants o' death so more than any other game you should be able to create a character that you enjoy playing. It's one of my favorites types of RPG and I'm clearly going to have to do more of it. 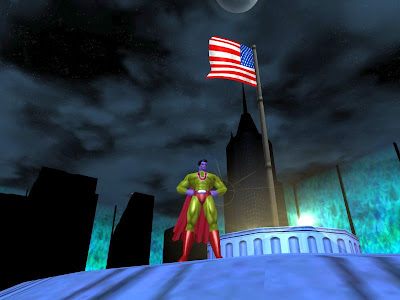 Labels: April 2011 A to Z Challenge, Mutants and Masterminds, Supers

Didn't they do this on Saturday Night Live a loooooong time ago? "Fighting for lies, injustice, and the Nazi way!"

Probably so, similar things have been done in comics too so it's not all that original. Fun to play with too, especially making him talk wit han Arnold accent.

If only there was a way to adapt him to my current D&D game...

I think he would be fun, and he has some obvious areas for growth, both mechanically (get better at hitting things) and personality-wise (try not be less of a jerk) and they're both good for getting along better with other players too, so I think he would be easy to fit into a campaign.

As for D&D, well, depending on which version - MultiClassing!

My german is a little rusty but I think it would be uberMENSCH. Always a great idea to take something like superman and tweak it. Imagine a weird UN style fight as supermen from different universe each raised in a different culture all clash!

Ah, but he was named in America by the media so they went with "man". At least that's my story...

I do like the idea of the culture-clashing supers. One of my other favorites in COH is Kaptain Amerika, who looks exactly like you think he does. Might have to write him up later.