Testing out a Supers Game 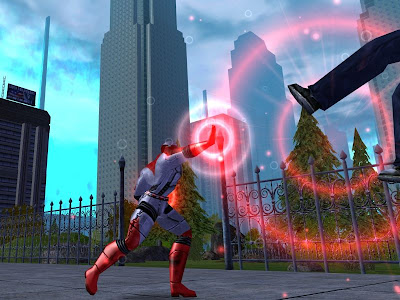 After some debate I am determined to get some kind of supers gaming gong for 2011, even if it's once a month. Since the main group is largely committed to 4E D&D this will probably be done with the family as the main players. I'm going to try out a few systems over the holiday break to see which one works for our purposes. One note: I make several references to Champions below and when i do I mean the tabletop Hero System game, not the MMO. In contrast, I mention City of Heroes as well, and I do mean the MMO there as we play it pretty regularly so it's a big factor here when discussing Super RPG's.

My main candidates are:

1) Mutants and Masterminds (2E) - I know 3E is out now but I have a nice pile of 2E books and I've never run the game, so it goes against my grain to go buy a new edition when I never used the previous edition. As I see it:

2) Champions (Hero System 4th or 5th Edition) - It's a very good system that can do pretty much everything at the cost of some complexity in character generation and slower-moving combat than some systems, although compared to 4E D&D I'm not so sure it's all that slow anymore. I have a very large pile of stuff for this and I would love to dust it off and use it for real for a change.

Advantages
Disadvantages
3) Marvel Super Heroes - This is a fairly straightforward system and I have a good amount of supporting material  (see a pattern here?).

Advantages
Disadvantages
Other options I considered included :
So it's really down to M&M or Champions with Marvel as a fallback third if neither of those goes over well. Wit ha more experienced or hardcore group of players I would run Champions in a heartbeat. With my less experienced and less crunchy group of players at hand M&M may be the best choice. I will probably run a combat for each and see what works the best for out group. Once I have that figured out we will start up a semi-regular campaign and see where it goes.
Posted by Blacksteel at 11:26 AM