Catching up on the D&D 4 Campaign

It's been quite a while since I posted any session summaries so i thought I would recap the campaign prior to starting them up again.

The campaign is title "Return to the Ruins of Adventure" and is set in the 4th edition Forgotten Realms. The specific location is the ruined city of Phlan on the Moonsea*. The inspiration was mainly the old gold box game Pool of Radiance with some reference to the actual pen and paper module Ruins of Adventure.**

My goal was to make a sprawling semi-sandbox campaign area  for the Heroic Tier where players could come and go and even make multiple characters if they wanted to with some static NPC's that the group would become acquainted with and a clear progression towards some larger threats in the region. The PC game was a mechanical inspiration as well as the city was laid out in neighborhoods which were effectively zoned by level. There is really only one area to investigate at first as it is the physical passage to the rest of the city from the small civilized section that remains. Once that's cleared things begin to open up and more choices are available to the players and then everything comes back together in one or two particular areas for the finale of the campaign. There is the possibility of some side adventures outside of the ruined city but most of the activity of the campaign will take place within the vast ruins of the once-mighty Phlan.

At least one of my players had played the old game so I kept quiet about the setting until we were ready to play when I sent out a link to this video:

So that explained the situation and everyone had at least a basic idea of what was going on. Here's a map of the city layout***: 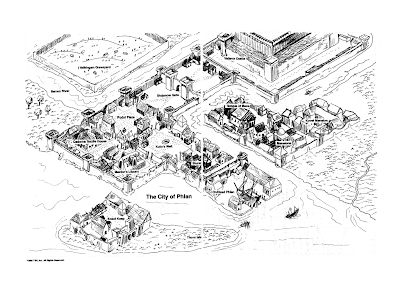 Play begins in the civilized section as the PC's find their way around town, meet some NPC's, and are eventually asked to clear out/retrieve artifacts from/burn down an inn in the Slums. Early sessions were slow but good and the pace has picked up some since then, though lately our track record on getting through encounters has not been great. We began with a party of 4 - Eladrin Wizard, Human Fighter, Human Warlock, and Half-Elf Bard. We added a Swordmage briefly then he disappeared. A Deva Invoker has made several guest appearances but may or may not return. Then UTHAL THE BAAAAARBARIAN joined up and they have been steamrollering the opposition ever since. Through 15 sessions the party is up to level 4 now and pushing for level 5, possibly in this next session. I stopped posting summaries about session 7 so I have some catching up to and will do that to finish out the year so stay tuned.


*which looks remarkably like Phlan did at the end of the 1E era. The more things change...

** which is just poor - you aren't missing anything if you haven't seen it, a real missed opportunity as it could have been a classic.


***which is of limited accuracy, players reading the blog, because it's from before the spellplague and who knows what's happened out there since then?
Posted by Blacksteel at 11:00 AM