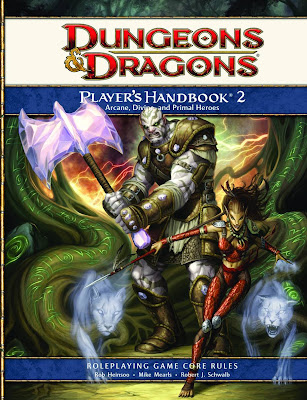 So the PHB 1 gave us most of the previous core D&D classes and races reworked for 4th edition. It was a good start but if you were thinking about converting an old campaign it was not a complete guide. The PHB 2 came out in 2009 and finishes up the rest of the adaptation process and mixes in some new stuff as well.

The 224 page hardback starts off with new races:
Deva - Effectively they are the aasimar from the Forgotten Realms 3E campaign guide. There's a reincarnation element added in but they are descended from extraplanar good guys - the opposite of Tieflings.

Goliath - new to me, they're the big bruiser race. Think 1E half-ogres without the bad childhoods or evil tenencies and you pretty much have it.

Half-Orc  - Same idea as before but with a +2 Str and a +2 Dex they are a very versatile race for the way 4E is set up and not just the barbarians they were in 3E.

Shifters - Sort of half-weres there are 2 types with different stat and skill bonuses. They're an interesting addition wiwthout being over or under powered.

One new addition in the PHB 2 is the addition of racial paragon paths. Previously all paragon paths have been tied to a particular class and sometimes a particular build within that class. There are 12 included here, effectively 1 per race. It's a good concept and adds to the choices available to players, always a good thing.

It also adds 8 new classes:
Avenger - a divine striker, 2 builds, 4 paragon paths. It's mainly a single target melee damage and lockdown class. Think "Paladin Bounty Hunter". There are a lot of powers that are boosted if there is no enemy adjacent to the target and a lot of move-to-the-target powers. Starts with only cloth armor so it's even more of a glass cannon than rangers or rogues.

Barbarian - a primal striker, 2 builds, 4 paragon paths. Another single-target melee striker, this one has better armor and slightly better hit points and surges than the avenger. Barbarians have various types of rage they can enter which remain until the character decides to leave them and receive various bonuses for being in them. They hit hard and they are very tough - what more could you ask for?

Druid - a primal controller, 2 builds, paragon paths. A lot of nice ranged elemental type powers with the slightly odd addition of beast form powers. The trick here is that certain powers are beast form only. When in beast form, you can use only those powers. When not in beast form you can not use those powers. This creates a bit of a split personality as the druid wants to stand back and throw lighting or frost blasts or something part of the time but will likely not use their beast powers if they do this for the entire battle. this leads to the weird situation of the melee -seeking controller, and given a controller's hit points, surges, and AC, that's rarely a good idea, even with the boost from being a primal class. The one saving grace here is that a druid's attacks mostly target reflex, with some fortitude and some will. None are vs. AC even in beast form. This helps make the melee powers more likely to hit than the usual melee attack powers of other classes.. It's an interesting combination and I like a versatile character, but I'm not yet convinced it's an effective one.

Invoker - a divine controler, 2 builds, 4 paragon paths. Channel divinity, ritual casting, some nice summoning powers, and a whole lot of ranged multi-target damage. The invoker combat powers are almost all ranged or area burst powers with no melee and few close burst or close blast type powers. This purity of concept lets the invoker stand back and blast away like an old-school specialty wizard - there's little reason to close in on your enemy. They are also one of the few classes to have significant summoning powers which can be fun to play with too.

Shaman - a primal leader, 2 builds, 4 paragon paths. Shamans have a spirit companion and a lot of the normal leader boosting effects come out of this spirit animal, meaning it needs to stay in close to the party. Most of the shaman's melee powers are performed through the spirit as well so the spirit probably needs to be up near the defenders and strikers in a typical fight. The shaman's other powers tend to be ranged 5 or close burst or blast 5 with some 10's showing up occasionally. This means that while the shaman doesn't have to be  on the front line he probably needs to be close behind. There's a pretty good amount of healing there, and the other powers tend to be ranged damage effects.

Sorcerer  -arcane striker, 2 builds, 4 paragon paths. Dragon sorcerers get a lot of bonuses tied to melee combat while Chaos sorcerers get effects like the old 2E wild mage where the die roll result brings in some kind of variable effect. About half of the sorcerer powers end up being burst or blast type shots and even some of the single-target powers have a secondary target that can be affected. One could go with the draconic sorcerer and focus on the close bursts and close blasts (many have a draconic magic kicker effect) or you could go with chaos and make a more standoff type mage blaster. Both have the interesting angle of being a  striker that focuses on area blasting effects - a multi-target striker, which has been a rare animal up to now.

Warden - primal defender, 2 builds, 4 paragon paths. Wardens are an extra-tough defender with light armor - extra HP, easier saves, and multi-target marking. Their powers are mainly melee weapon, strength vs AC for at-will's and encounters but their dailies are almost always some other interesting effect - a form of some kind, a burst or blast effect - something more interesting than another melee strike for X damage.

So the new classes are interesting and quite varied. What else is there?

I think it's a solid book and it completes the old-school class and race set needed for a conversion.* Out of the 10 characters in my current 2 games, 4 of them are classes from this book and 2 of them are races from this book as well - a pretty good showing I think. If someone is getting started in D&D as a player this is probably the book I would recommend as the next thing to get after the PHB1. Now Wizards just announced a new class book that will cover the PHB1 classes in an updated format, so some of my opinions might change next year (maybe Rules Compendium + Class Compendium) but until them I think the PHB 1 + PHB 2 gives a player a nice wide selection of things to play in pretty much any D&D campaign.


*other than the monk, but hey - we're talking about monks. They shouldn't be that important anyway : )
Posted by Blacksteel at 11:58 AM

I still haven't seen a compelling monk class in any edition I've played. Even stacking kits, or templates and prestige classes on them they've always been fast survivors who don't pack much punch (pun intended). Or at least don't pack as much punch as a similarly geared and statted character of another class.

They're great for getting away alive out of a TPK. Actually no, the one monk I had that saw a TPK died too. Stupid alhoon. Stupid disintegrate.

Yeah it's a class I've always wanted to like but just never could get excited about. Monks are usually the sort of jack of all trades character that suck at everything. Open-handed damage is usually weak and hard to magic-up, armor class almost always sucks, special abilities are usually all over the place, and thieving skills were posr in older editions too. The 4E Monk is probably better just because of the way the game works now but I'm more of a barbarian or ranger or sorcerer type guy when it comes to strikers.

I'm not a fan of 4e really but one thing I liked a lot was the return of half-orcs as viable rogues. I wished they'd drop the whole berserker thing, but I guess too many of the young'ns are used to that from 3.0. Give me the cowardly, conniving, bullying 1/2 orcs of 1st edition any day! But now if I were to play 4e again I could make something like a 1/2 orc assassin from the glory days.

That's how I felt too - they're back to being closer to the old cleric/assassin type Half Orc rather than always being stuck in the barbarian role from 3E. They feel more like a character that could have grown up in a city - maybe the darker part of town, granted - rather than wandering into town as a complete outsider like an apache in an old western.