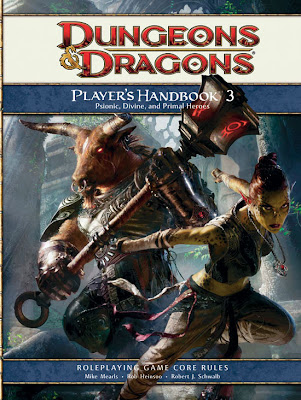 Another nice-looking 224 page hardback rulebook, this one was published in 2010 and to me is where we start to get into the more optional races and classes.

We get 4 new races:
So the races are a little mixed. This also marks the new approach to racial attribute bonuses. Previously each race received +2 to each of 2 different stats. Dwarves were +2 Wisdom and +2 Con, for example. Beginning with this book (and continuing into the new Essentials books) each race has a fixed +2 to one stat plus the choice of a +2 to one of 2 other stats. Dwarves are now a +2 to Con and then a +2 to either Wisdom or Strength. I'm mostly fine with this as it does increase race/class flexibility, but it needs to stop there/ or else risk losing all flavor. As long as one of the stats stays fixed then I'm OK with it and hopefully that's where it will stay. Plus I see it as a better answer than adding in numerous sub-races like we saw in Unearthed Arcana, 2E, and 3E. Want to play a Mountain Dwarf? take the +2 to Strength and call it a day.

We also get 4 racial paragon paths, one for each new race.

We then get 6 new classes, 4 of which are based on the new Psionic power source. Most of these vary from the usual power structure in that they get at-will's and dailies but no encounter attack powers. Instead the at-will's are augmentable via psionic power points. Most of them have 2 levels of augmentation with increasingly strong effects. At the levels where they would normally get a new encounter power, instead these classes get to choose a new at-will power but they can only have 3 at-wills at a time. This gives these classes a lot of flexibility during fights as they can decide when and how much to amp up each power. Power points are rather stingily doled out through the levels and the costs to augment various powers increase with level so the options never get out of balance. I wasn't sure about it at first and I would still like to see them in action but I have warmed up to the idea after going through the book again.

Ardent, psionic leader, 2 builds, 4 paragon paths. Some healing, lots of ally movement and transferred attacks, and some teleports. Most attacks are Charisma vs. AC, melee weapon, and have some kind of secondary effect. This looks like a fairly interesting class, especially when you add in the flexibility of the augment powers.

Battlemind, psionic defender, 2 builds, 4 paragon paths. This one's mark does automatic damage equal to the damage the marked enemy inflicted - automatically, no to-hit roll. That could get very nasty at any level.. Most attacks are melee weapon, Con vs. AC. There are a lot of powers that add damage resistance, a fair number of damage + debuff attacks, and some aspect powers that act like a fighter stance power. They look pretty tough and the augments give them a lot of flexibility too.

Monk, psionic striker, 2 builds, 4 paragon paths. Monks do not get the augmentable ability  of the other psionic classes. Instead they follow the normal at-will-encounter-daily structure of previous classes. Armor is weak, weapon choices are limited. Almost all attacks are Dex vs. Reflex so hitting should be easier than some. Most are also melee 1 or melee touch. Many have a target of more than one creature or are close burst 1 or 2 so there are multitarget options, always nice for a striker.

Psion, psionic controller, 2 builds, 4 paragon paths. Armor and weapons are traditional wizard-type weapons. Most powers are Int vs. Will, ranged 10. There are some area bursts, but most of the powers target one creature. There's a fair amount of forced or limited movement inflicted by these things - slide, push, slow, immobilize, prone, etc. I can see the felxibility from the augments being a lot of fun here but the focus on single-target effects is going to play a little different from other controllers.

Runepreist, divine leader, 2 builds, 4 paragon paths. Decent armor selection, simple weapons only. Most attack powers are melee weapon, Str vs. AC, target one creature but there are quite a few close burst powers in the mix too. Those bursts include a lot of ally buffs and the 2 builds tend to take one of two paths: Ally buffs or enemy debuffs, and there's not a lot of crossover between the two. It's interesting but I wonder how effective it is compared to a Warlord, who covers some similar ground.


Seeker, primal controller , 2 builds, 4 paragon paths. Light armor and a focus on missile weapons, either bow types or thrown weapons. Most attack powers are Wisdom vs. AC, Ranged Weapon, target one creature. There are a few area bursts but the vast majority are single-target ranged attacks. It seems almost over-focused but if you're looking for a super-archer or a super ax-thrower this one might be up your alley.

Next we get Hybrid Classes. This is a new form of multi-classing where you get 1/2 of one class's abilities and 1/2 of another class's abilities and combine them into one character. With the warnings on this section I would almost call this an experimental rule section.  I do agree with some of the sidebar commentary that they fit best as a 5th or 6th character rather than as a cornerstone as I have heard mostly bad things about them and I am not sure that the versatility is worth the effectiveness that you give up. Still, it's an interesting option and more like multi-calssing in some older editions of the game than the feat based multiclassing in the PHB 1 & 2.

After this we get 6 new epic destinies that are aimed at the classes presented in this book. More = better so this is good.

Next up is Skill Powers and this is a great addition to the game. All classes get utility powers at certain levels which are mostly non-attack abilities (though not necessarily non-combat abilities as there's a lot of healing and movement tucked into them) and sometimes a player may not see a utility power that they like. Skill powers are additional utilty powers for each level at which utilities are available. The character has to be trained in the relevant skill, but other than that it's a one for one swapout or option that any character can take. Acrobatics and athletics give a lot of movement options, bluff has one that lets you un-mark yourself, diplomacy has a daily that lets you buff your allies with a stirring speech for the next encounter, and there are a lot of re-roll the skill check or substitute a different skill check powers as well. It's a really nice addition and an example of how a modular plug-in design enables easy future expansion.

Then we close with 18 pages of magic items and a few pages of terms and a glossary.

Overall it's a good book, but it's very much optional in my opinion. If you really like psionics, then it's worth picking up. If you don't like them then you can probably pass. Beyond the class and race stuff the part I really like is skill powers but they probably aren't worth the price of the book all by themselves - unless it's cheap. Being a completist I had to pick it up myself but out of the 10 characters in my 2 campaigns right now none of these races or classes is being used and no one has asked about any of them. Considering that the races are all new (to core D&D anyway) and the classes are all new other than the monk, and that the monk was always kind of an oddball class anyway then it's really not an essential or even particularly useful resource for a typical D&D campaign. The main fit that I see is if you're doing an extrplanar/planescape/spelljammer type campaign - in that case it could add a lot.

As far as recommending it to a new player - probably not. I would recommend the relevant power book for a player based on whatever kind of character they were currently playing before I would steer a new player towards the PHB 3. If someone is coming in to D&D 4 from earlier editions and has an interest in psionic characters then it might be a good fit but for most it's PHB1-PHB2-Power Book - and then maybe PHB3.
Posted by Blacksteel at 11:00 AM