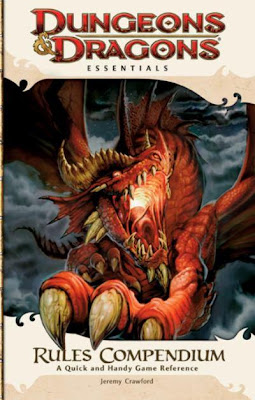 It's a 320 page digest-size softcover. It contains all the rules for the game. It's 11-something dollars on Amazon. It's good. Buy it if you play the game at all. It's not an "Essentials" book - it's THE 4th Edition D&D Rulebook now - period.

I could write a lot more about this, but that's what really matters. In a completely different fashion from the disaster that is the Essentials Red Box this thing is a home run on all counts. It's up to date. It's complete. It has a table of contents, a glossary, and an index. It has all of the non-character rules from the PHB. It has stuff from the DMG's like encounter building, terrain, and traps.

The biggest change in it is probably the magic item rarity where items are now divided into common, uncommon,and rare. I kind of like this approach as it gives one more way to measure the relative value of an item before placing it in the campaign and it expressly mentions that uncommon and rare items cannot be made in the current game world. It limits the off-the-shelf items available to PC's and makes magic a little more exotic - both good things. On the other hand, as a DM I'm going to decide on the placement of every single item in the game anyway, so it's not like this is going to suddenly either open up or restrict what my PC's end up owning. It's probably a good change but it's not a huge change.

What about new players? Should they start here? Probably not. See yesterday's post about that. But it would make a great Xmas or birthday gift after starting someone on the PHB.

Given the importance of DDI to the company, I wonder if books like this (and the other Essentials books) might not be the way to go in the future. I love my full color hardbacks of the modern era after 2 decades of black and white, but if most players are going to use the online version of the rules for character and monster building then maybe $20 softcovers are better than $30 hardcovers. I don't know what percentage of D&D players pay for DDI but maybe more of them would do it if the books were cheaper - it's just a thought on my part.

If that was the approach I almost think this one should be labeled "2010 Edition". Just go ahead and announce that every year, say at Gen Con, that you're going to release the Rules Compendium for that year which will include all of the updates from the past year in a new printed version.  This would keep the off-line players in at least the same ballpark as the online players AND it would mitigate the RPG publishing problem that sales decline once the core books have been published and purchased. this way you would have a new core book once a year, on top of whatever supplements and things are published the rest of the year. I think it would sell alright.

Anyway, Rules Compendium: The D&D book I will use the most over the next year and the book with the widest appeal to all 4E players & DM's.  It's as good as it should have been, which is a good thing for all of us. Thank you WOTC I hope this one does very well for you.
Posted by Blacksteel at 11:00 AM