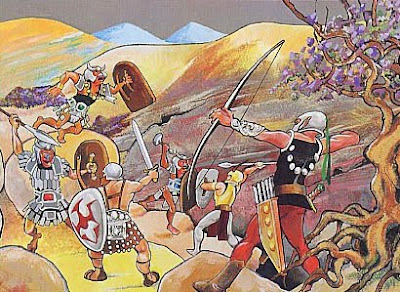 Having the party back together again at the Keep the team heads back to the Caves. Moving into the same cave they have been exploring for a week now and head stright back to where the goblin guards used to be. There are no gobbos, but they do find a locked door. Smashing it open they see a room full of hobgoblins. A big fight breaks out with 6 heroes on one side and 13 hobgoblins (males and females) on the other. It goes on for 9 rounds and all of the evil humanoids are slain but Thaddeus II falls as well.  The group decides to head back to the Keep as everyone is beat up.

At the Keep everyone is healed up and Orick the Dwarf is recruited to join the party. They head back to the Caves after one day of rest.

Deciding to change things up a bit the group heads into the western part of the goblin lair and encounters no opposition. they spend a few hours searching the chief's room , a common room, and a storage room and much loot is gathered - finally!

Encouraged by their finds they now head back to the hobgoblin room they fought in last time and once again kick down the door. Four males and two females now occupy the room but are quickly dispatched.

Moving deeper into the caves they come to a torture chamber with two hobgoblin torturers watching over some prisoners chained up to a wall. Some stealth is attempted here, but their shots go wide and melee is soon joined. These two scarred hobgoblins are quite tough but fate is with the heroes and they dispatch them without losses beyond a few minor wounds. Now they begin to debate what to do with the prisoners...

This one went much better than the last few sessions with only 1 character casualty and much loot found. The prisoners are an interesting mix and the debate should be interesting as well. The party is mostly lawful with a few neutrals.

I am still debating on some changes as when 1 PC death is a "good" session it seems things are still a little more bloody than i would like them to be.