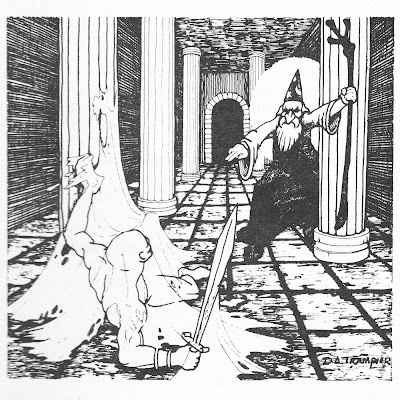 After the last few sessions I am having a bit of a crisis of conscience. I like the old-school B/X rules but I am worried that the parade of character deaths might discourage the boys from continuing. It's worse than I even remember as far as the death rate. My "bind wounds" rule helps a little, but 1 hp or even 1d3 does not put a fighter back into fighting shape, it just keeps him from dying and maybe lets him shoot a bow from the back of the party. They have started to see 2nd level as the safety zone - lots more hit points. They have also already asked if there's a way to play an elf that doesn't need 4000 xp's  to get to 2nd level. So I'm tempted to make some changes.

We're going to finish the Keep as-is - no major changes. I was planning to run them to the Isle of Dread after this, but now I'm not sure. I had also planned to start a 1st edition AD&D campaign this fall using the Temple of Elemental Evil after they had some B/X experience under their belts. I do like my little homebrew "Dragonport" world but the Temple belongs in Greyhawk, and I don't really like world-jumping low-level characters. Plus Lady Blacksteel has not been a player in the B/X games but I would like to expose her to 1st edition.

So my answer is this: Dragonport (the New Old Campaign) will continue after the Keep as a side campaign for me and the boys and anyone else who wants to play. It probably won't have a regular schedule but I don't want it to disappear and I don't want to convert it to a different edition - Labyrinth Lord, maybe, but not another edition of D&D. I've always wondered how a high-level BECMI game would work and hopefully we'll get the chance to explore it. I will finish out the map and place some more of the classic modules, figure my wandering monster tables, and generally flesh it out. Plus I can use a new version of the same map for my Mutant Future games down the road as a prequel campaign.

As soon as we finish the Keep I am going to figure out a night to start the TOEE campaign with the Apprentices and the Lady and possibly some of the friends from my other 2 campaigns if they can find the time. I have 2 PHB's and a DM Screen coming via ebay and I need one more. I'll post my house rules here once I've decided what they are - probably PHB + a few items from UA, Max HP's at 1st level and that's it. We will play on a regular night or afternoon every week as much as possible so it will be the standing game and Dragonport will be more of a fill-in.

All in all the old-school future looks promising and I feel pretty good about the solution to my problem. Now if I can find time to squeeze in some Star Wars d6 and another Supers campaign everything will be perfect.