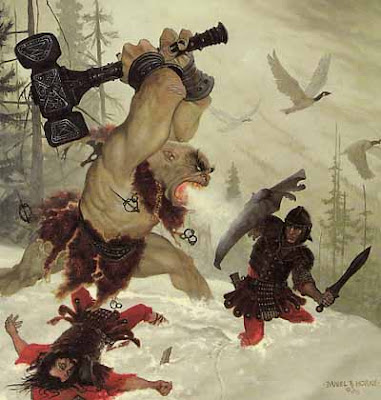 One of the side effects of the OGL Hubbub has been the explosion of "there are other games like D&D that are not D&D" discussions online. Forums, blogs, YouTube ... I've seen a bunch of them and even though it probably shouldn't it still kind of surprised me. I still assume to some degree that other people are at least somewhat aware that D&D is not a unique thing. We have 45+ years of other RPG's (you know, "it's like D&D but...) and they are easier to find than ever in electronic form, yet so many people seem unaware of them. How?

I get it ... we have a ton of people now who came into the hobby through 5th Edition D&D. It's the only game they've played and it's the one their friends play so it seems like its own thing. I wonder what that percentage is? Say, of all the people who will roll dice for a combat or skill check this month, how many of them would have their minds blown to find out there is a <gasp> Star Wars "like D&D" game? What about Lord of the Rings? Marvel and Marvel-like properties? Is it half? I'm not even saying "played" another game or bought a book or a PDF - I'm just talking about awareness.

I always thought the big franchises would bring new players in at a significant rate - Star Wars, Star Trek, LOTR, you know the list. When the MCU started being referred to as "The MCU" I thought it had achieved a big enough status to bring new people in there but apparently not. Who knew the hottest ticket for bringing in new RPG players would be ... the oldest RPG ... again.

Now that the boat has been rocked there seems to be a lot of interest in broadening the horizons of these neo-gamers. I'm still not sure if it's truly new players showing a real interest or grizzled veterans like me desperately hoping we can break some of them away from the Forgotten Realms and into some of the other awesome options out there. Hopefully at least some of the less-involved are discovering that these exist.

What's the easiest "other" RPG to drag 5E-only gamers into? The easy answer is something very similar to D&D like Pathfinder or one of the OSR games but I think that's misleading because if it's more swords and spells you're going to get asked at some point "why don't we just play D&D"? My best candidate is Star Wars - pretty much everybody knows at least some of it and it can accommodate a wide variety of campaign styles. Maybe the FFG funky dice edition isn't your favorite but there is plenty of support for d6 still out there and it's pretty easy to grasp and there is still material for the d20 versions if you want to go class and level with it.

I don't know that I have more conclusions than questions here. It's just been an interesting thing to watch.

Based on my own personal experience and preferences, there are two additional things to consider...
1.) Quality control. 5E is very polished and there is a lot of material for it. This comes with an air of quality for new players. They know that they are going to get something more polished. Unless you dive into the online culture of blogs and YouTube, etc. It's difficult to discern reputable indies from a self-published homebrew in pdf form. I didn't realize how much of D&D's quality was an illusion until I started running WOTC's pre-published modules and realized how much they needed to be modified to be playable. Before that I assumed inconsistencies in my D&D homebrew were my fault for being a newb... but even the pros do it. So oddly, that has made me more comfortable trying new things, but it takes a certain level of experience to recognize that none of these systems will be perfect and confident enough that you can improve on them with your own mods.
2.) Big name IP can detract from the experience. I've always struggled with games based on movies or other established media. Until shows like Andor and the Mandalorian proved it could work, it always felt a little weird to do Star Wars without a Skywalker. The first TTRPG I ever rolled a character for was the TMNT game and it felt a little odd just being some random mutant lion unaffiliated with the "real" heroes of the world. I had similar misgivings playing through a Marvel FASERIP campaign a couple years ago... Why couldn't Daredevil or one of the other established street level heroes handle this problem? While Forgotten Realms always has Drizzt and Elminster gallivanting around, it feels open enough that it doesn't bother me.

"Who knew the hottest ticket for bringing in new RPG players would be ... the oldest RPG ... again."

As I have stated many times in the past, I don't get it. It boggles the mind. With all the movies, TV and Streaming Shows, computer and video games, how many D&D Fantasy franchises and examples do we have? More than every before I'll grant you but how many really good ones? Rings of Power? Willow? C'mon.

I'll never get Fantasy's popular in light of the lack of good fantasy pop culture media. Well, there is Anime and Manga...

Geoff as far as quality, well, maybe but take a look at a Mutants and Masterminds book or an FFG Star Wars book and you'll see something as good or better than anything WOTC has produced. I think there's a huge and obvious difference between companies publishing as a business and people putting together a PDF at home on the side.

As far as Star Wars without a Skywalker, well, some of us have been doing that for decades. Of the recent stuff I thought Rogue One would have broken that open for most but maybe not.

And sure, Marvel or DC might feel a little crowded but there are a ton of non-licensed Superhero RPGs out there - M&M, Hero/Champions, ICONS, BASH, the new version of Silver Age Sentinels, ICONS, various FASERIP clones - from bigtime books to indie PDFs. You'd think the concept of superheroes would have made some headway at this point with everything from The Tick to the Boys to Invincible reaching some level of notice but maybe not.

BA: I hear you. I would note that there is a new version of BESM out there now - maybe that will tap into some of the Anime energy.