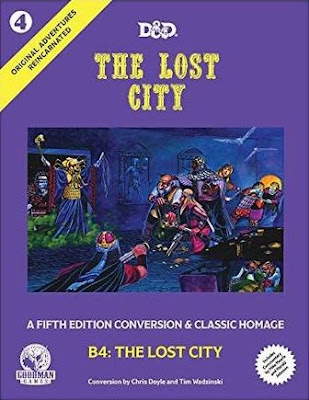 I picked this one up a while back and thought I ought to discuss it a bit.

I've run the Goodman Games versions of B1/B2 "Into the Borderlands" and X1 "Isle of Dread" and enjoyed them immensely as did my players. Returning to those old stomping grounds from the beginning of the 80's in the current edition with a group of players where a few of them were around for those early days but most of them were not was a blast. Watching some of them search for a plot - when the secret is there is no plot - was entertaining along the way. GG is doing these right.

The third release was S3 Barrier Peaks but it has a much higher level range so I have not tried to run it yet - one of these days.

B4 though is a starting adventure so I could fire it up at any time really. I have to admit up front though that while I've owned a copy of the original for decades I've only tried to run it once and it didn't last long. I played in it once before that and it didn't last long then either. It had been a while since I read through it but this book includes the original version and an updated 5E version with some expansion material which makes it easy to compare the classic versus the new.

Reading through it my old feelings crept back in from way back - I just don't like this adventure all that much. The original felt like half a module as it sketches out a massive underground city but it only details part of a dungeon, a ruined pyramid/temple, only fully details half of that structure, and then gives a page or so of ideas on what's in the rest of the city. 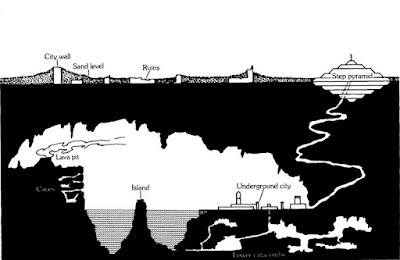 See that map? Fires up some ideas, right? Well, the original module covers the top half of the Step Pyramid in the traditional keyed room with description style, then gives a more basic rundown with monsters and maps for the lower half, the one page of notes on the actual city ... and that's it! The rest of the map is up to the DM. I remember feeling kind of ripped off when I read it way back when that while it's titled "The Lost City" the actual adventure is "The Step Pyramid" plus a page of notes.

I so wanted to like it - it is one of the most Conan D&D adventures ever published. The party gets separated from their caravan crossing the desert, finds a ruined city, discovers a secret entrance into a large structure, then finds an underground realm inhabited by various masked and possibly crazy people belonging to different factions with different agendas which is ruled by a monster/demon/thing that has set itself up as their god. It's potentially a great "contained sandbox" as it is underground but the players can do whatever they want - join a faction, try to fight the demonic ruling thing, establish their own power base and take over, or just do some exploring - and possibly looting - and move on.

At least, it would be a great sandbox if there was more there to hang stuff on. I think it over-details the pyramid and then misses out on the rest. You get ten small dungeon levels with pretty much one stair or ladder connecting each level to the next so the level design is not complex. The factional material is interesting - there are 3 old gods of the city whose followers are trying to overthrow the cult of Zargon, the ruling entity of the city - but the space is so constrained that I'm not sure how much alliance-building the typical dungeon crawling party is going to do.

The big bad guy Zargon lives in a one-room level at the bottom of the pyramid. He's likely too tough for a party to take on even with some help (12HD, AC0, 7 attacks/round 6 of which do 1d8 + one at 3d8) and it's just a weird place to put him. Shouldn't he be in a temple of some kind in the actual city? Maybe on the island? Maybe over by the volcano? You know, closer to the sacrifices he demands? Perhaps not in a 40x40 foot room all by himself? 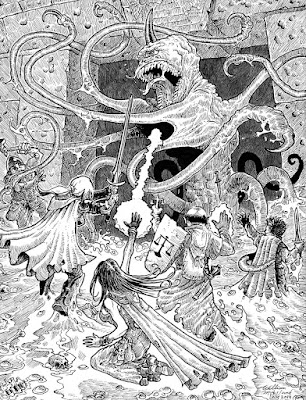 I really wish the original had made the city the focus and spread the encounters out amongst the rest of the map. Make the pyramid a 3-level dungeon that gets the players up a few levels, ends with a temple to Zargon, and then lets them descend to the city for the rest of the adventure. Even with a fair amount of the city left undefined an encounter table and some specific locations equivalent to a single dungeon level would have made things much more interesting and given the factions room to breathe. Imagine rallying the various factions to take on the cult ending in a fight against his weird form on top of a step pyramid in the city or on that island that would be the cult's big stronghold.

Now the good thing is that the new super-edition from Goodman Games has a similar take on things. They do not change up the original section with the pyramid other than updating it with 5E stats etc. as that is the mission statement for these books: update what's already there then expand around it:

Beyond this there are new spells, new items, and new monsters as with the other volumes in this series, plus a small set of handouts/illustrations for the players. A nice touch is having all of the maps - and there are quite a few - collected at the end of the book in one big section which ups the playability in a nice way. 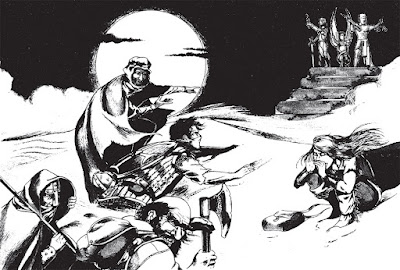 The notes suggest that PC's could end up at 6th level or high playing through all of this material and I can see that happening as with all of this material it becomes a mini-campaign all on it's own. The flow might involve some circling back in and out of the city, I think, for the best experience and I would definitely move Zargon out of his hidey-hole in the pyramid down into his temple in the city but there is a lot to work with here - straight-up fights, factional encounters and negotiations (I can see some dedicated bard players going nuts here), and lots of exploration covering wilderness, dungeon, and general "underground spaces" type terrain and locations.
I loved the idea of the original but thought the execution let it down. This version finally lives up to the potential I saw in the original and I can see it leading to a lot of fun for a new adventuring party. If you want a somewhat different way to start a campaign this is definitely worth a look.

Personnaly, I would do something like in the Hidden Shrine of Tamaochan where the PCs start at the bottom (in the underworld) and have to claw their way to the surface, finishing with the step pyramid. Of course, the encounters would have to be shuffled a lot.