One of the hazards of miniature wargaming is that different games have different standards for basing the miniatures. Width, length, even number of figures per base can all vary from game to game even within the same historical period. Some look for individual figure removal from a unit to reflect casualties while other just track damage in some way until a threshold for removing the entire unit at once. One particularly annoying aspect is when a particular game decides to change its own standard for base sizes - which has happened quite a bit in 40K. So let's talk about how to handle that.

The first one I can remember is when Terminators went from 25mm to 40mm bases. This was somewhere around 3rd edition. At the time I had just had the one 5-man squad of metal terminators so i just picked up some 40mm bases, glued them on top of those, 25mm base and all, re-flocked them, and went on about my life.  Looking at them now I would probably take a different approach than having each one stand on its own little hill but I'm not going to re-do them at this point as it's not worth it to me.

Over the last 5-6 years though regular marines went from 25mm to 32 mm bases and ork boys have gone from 25mm to 32mm as well. That's several hundred figures impacted for me right there. Now I mostly play at home with family and friends so this is not an urgent thing. Technically the only rule GW has stated on basing is "use the base that came with the model" which is great but when you have a pile of older figures it can get a little weird to mix them in with more recent acquisitions. Warhammer 40,000 is in no way a precise enough game that this kind of thing dramatically unbalances things but something in my head wants to "keep up" and try to maintain most of my armies with the current standard. So ... how can I do that? Do I have to pull models off of bases they've been on for 30 years? Risk breaking them or at least damaging the paint and destroying whatever flocking effort I put into them back then? Well ... no. No I don't.

What you see at the top of the page are three of the options I've found over the last few years. Lets look at each of them. These are all intended to adapt a 25mm base to 32mm. 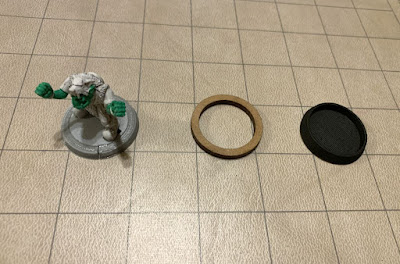 One of my old Snakebite orks will be assisting us with this exercise - let's call him Pete. There you see Pete the Snakebite Ork taking position with one nice solution that is probably the most snug fit around an old 25mm base. It's 3D printed by the seller and it does fit nicely. A few of them were a little rough on the ends where they join together but a little file work settled this pretty quickly. They come in different colors as well if you might want to leave the sides unpainted.

The only downside is that given that snugness they are not tolerant at all of any overhanging base material, particularly crunchy stuff. So if you've had some "free expression" with sand or gravel or even sawdust hardened by time and a varnish coat it can really interfere with the execution here. The only other thing to watch is that it may be slightly taller than some of the 25mm bases so you can get a lip effect where it meets the base - I suggest giving it a second go-round with the flock if this happens. 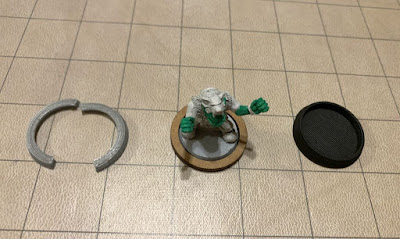 Here Pete is modeling the wooden ring option for us. This is the most basic option in a way and it is also the least expensive - which is why the rest of my orks will be wearing them soon. It is not a particularly tight fit so it can leave a gap, particularly at the top. There can also be a slight lip effect here too depending on how you're doing the base. There is no slope as you find in most other round bases so if you like that beveled effect these may not be your cup of tea and they won't match if you mix them into a unit with normal GW 32mm bases in that respect. The other trick here is that since you will be liberally applying glue in that gap to secure it to the existing base and it will be moving downwards ... make sure you don't glue it to your table/desk/workbench. No, that totally never happened here - why do you ask? 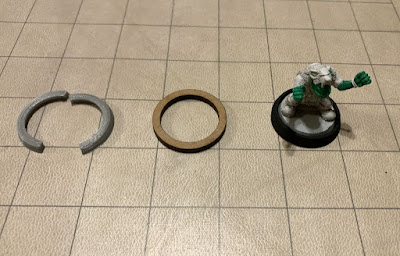 Finally, Pete is now wearing the extremely fashionable cupholder-style base expander. Honestly these are probably my favorite but they also cost the most. They slip right over an existing base covering it all the way around. You glue your existing base to the floor of this expander - no danger of table-gluing here - and then fill in any gap with glue and flock and you are in business. There is a slight gap at the top but this makes it less picky about any overhanging material than the two-piece option up above. 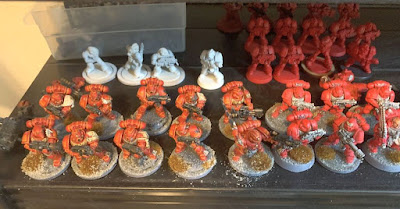 Here's a sample of the different options on some Blood Angels. On the left you can see some of the wooden ring options that clearly need a second dose of flock to close those gaps. On the right are the cupholder style bases which I think look really good.

Now this is strictly a need for the stuff I have already painted and based. If you have unfinished older figures you can buy 32mm bases both slotted and unslotted in big numbers fairly cheap and if you're looking at some classic metal marines or something of similar vintage that is the way I would go and have gone myself.

Here are some links to the eBay stores for the makers of each of these options. I have nothing to do with any of them other than having bought some of their wares:

Hopefully this will help someone out in some way. It's good to have options.