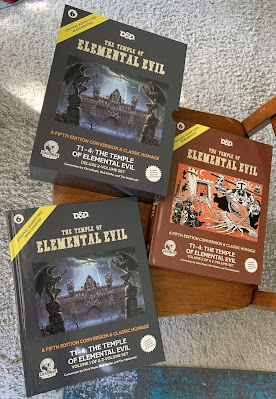 So yes - next year (after Deadlands at least) I expect to dive back into 5th Edition with something big. To me the biggest advantage of 5th is the ease with which a lot of old school stuff translates into it without a lot of recalculating and Goodman Games has been doing it right with this series. In an interview I saw one of the writers on this project mention that if the original version had 17 goblins in a cave the new version has 17 goblins in the same cave. Sure, they will have 5th edition stats but they didn't go through and try to reconfigure it to fit 5E's encounter standards and to me that's a feature - heck that's the right way -  not a bug.

It is a straight-up linear presentation. Starting with the introduction, essays, and interviews - including one by Jon Petersen going through the saga of Gygax and TSR and the temple -and then moves right on into a reprint of T1, then a reprint of T1-4 ... so yes you get Hommlett twice, effectively. This takes up 220+ pages in the first volume and if you do not own a copy of the originals this is as good a version as you could ask for.

The 5E version starts in Book 1 and then continues into Book 2 with the monster and magic item conversions at the end. 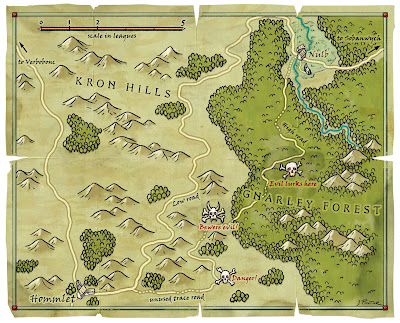 I have only skimmed it at this point but I know this adventure fairly well and it looks solid. Fleshing out the elemental nodes alone is a big improvement.  I played parts of it in 1st and 2nd, ran some of it in 2nd, ran "Return to" in 3rd, converted it myself and ran a chunk of it in 4th ... it's been a part of every edition in some way for me.

Now I am not one of those people who will claim this is the best adventure ever made. It does have flaws. It can turn into a grind with 4+ dungeon levels in the main temple. That said the beginning (Village + Moathouse)is a great start to a campaign and the temple itself gives you an epic quest to attempt and a helluva story to tell if you pull it off. Treating the temple itself as more of a death star infiltration at first rather than a frontal assault can be a lot of fun for the players and the DM both. There is the whole mess of the Zuggtmoy/Iuz/Elder Elemental God thing the DM needs to think through as well if you want it to make sense in your head but it's been run many times without that breaking it so maybe that only matters to me.

I do have a Deadlands campaign to run - more on that later - but I am looking forward to sharing this monster with my current group.