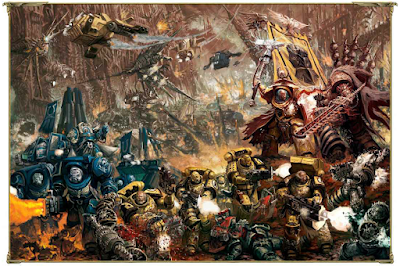 8th edition has been going really well here. We've played 1000, 1500, and 2000 point battles. Apprentice Red has played a little bit with his Orks. Apprentice Blaster is focusing exclusively on his Space Wolves. Apprentice Who has joined the fray with a new Tyranid army. One of Blaster's friends has joined in as well with a new Tau army too. I've built some ruins for a new city board - haven't painted them yet but I've built them!

I'm going with  a new policy on this edition as well: I'm getting all of the codices as they come out. We play most of the armies anyway in our little group so why not? I have Space Marines and Chaos Marines already and I'll be adding Grey Knights in the next week. It's not cheap but this has really turned into our main (if not only) miniatures game so why not go all-in?

Army-wise for myself it's been chaos chaos chaos! Mainly Iron Warriors but with a healthy side order of Khorne daemons and World Eaters. In June I was scattershooting all over the 40k universe, picking up a unit here and a unit there for a bunch of different armies - Chaos, Blood Angels, Dark Angels, Orks, Eldar. I decided this was just going to lead to a bunch of half-finished armies competing  for playing time so I went with a variant of my "Year of the Eldar" approach. The second half of 2017 is the "Year of Chaos" where I am finally making my Iron Warriors into a full-on massive force and getting the daemons into usable forces as well. Getting the CSM codex really helped solidify 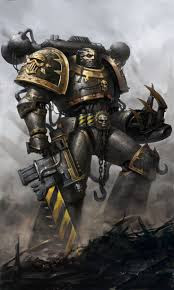 
Expansion: I don't really _need_ anything but I am looking at maulerfiends and maybe some raptors just to have some of everything in this army. 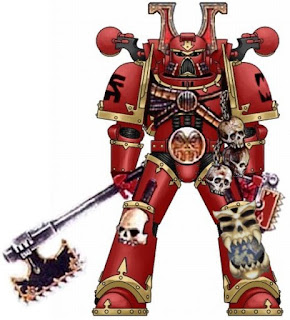 This is a fairly new addition to the force. I started picking up more berzerkers and while trying to decide how to integrate them into the army I realized I could just make a separate World Eaters detachment to include whenever I felt like it. This is mainly driven by the WE's being able to take Berzerkers as troops. The core force right now is Kharn, a dark apostle, and an exalted Champion accompanying a trio of 8-man berzerker squads in rhinos. That's around 1000 points and makes for a nice add-on force.

Expansion : I'm already considering expanding it into a full army on it's own - land raider, helbrutes, daemon princes, more berzerkers. We will see. 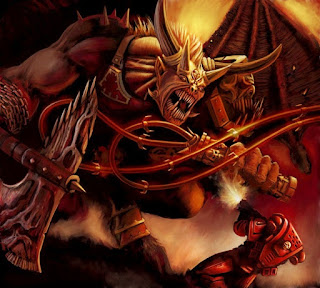 I mainly focused on Khorne daemons as they work well with a more shooty Iron Warriors marine army. Right now it's built on two detachments:


Pretty basic right? I also have a unit of bloodcrushers I can add in, and the specific unit sizes above can be varied somewhat, but the sauce is in the other HQ choices. A herald on a juggernaut, a pair of khorne daemon princes and up to three bloodthirsters. Taking the thirsters as a separate supreme command detachment and I am pushing 3000 points.

Expansion: Well I am still building this one but I think a skull cannon or two would give it a little shooting and some more heralds would make it more playable at lower point levels. Plus it can always use more bloodletters.

I'll see if I can put up some battle reports and talk about what I am thinking with the rest of my armies next week.
Posted by Blacksteel at 12:00 PM