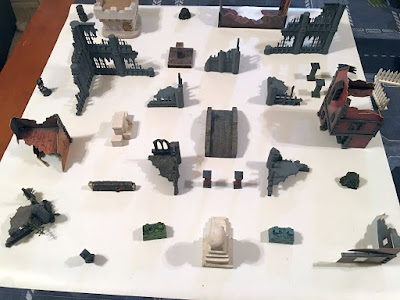 After talking about Frostgrave as an RPG a while back and looking at the miniatures game even farther back I figured we really ought to play the damn thing. So, over the weekend, Blaster and I did just that. It was just the two of us and we just played the "standard game" from the book, not any particular scenario.

Table-wise they recommend a 3' x 3' area, so we flipped over our X-wing mat and started dropping ruined city parts on it. It's not all that pretty but this is a "prototype" after all.

I took an elementalist because I figured getting a feel for the blasting wizard would give me a solid baseline. Blaster took a necromancer because he was in a zombie kind of mood. We both took apprentices because it makes a ton of sense. Soldier-wise I took a barbarian, a ranger, an archer, two thugs, and a war hound. Blaster went templar, infantryman, 2 archers, 2 thugs, and a war hound. He managed to summon a zombie before the fight while I failed to craft a construct. 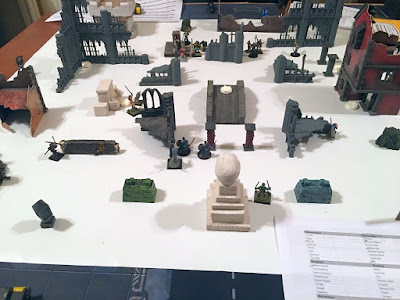 We set up our forces and commenced to fightin'.The goal is to hurt the opposition and steal away as many treasure tokens as possible. With 2 players we had six of those on the table.

I quickly discovered that it's very important to keep soldiers close to your wizard and apprentice. First, they provide cover! Second, the sequence of play is wizard + up to 3 soldiers within 3 inches of him, then Apprentice + up to 3 soldiers within 3 inches of him, then your leftover soldiers. It really sucks when you realize all of your heavy hitters have moved off on their own so you're activating just your wizard, then just your apprentice, then all of your other guys while your opponent is moving the full 4 guys each time.

Now you can't always do this. Somebody needs to go retrieve that treasure token on the bridge and it's not going to be my wizard ... hey Thug Bob, why don't you run out there real quick and grab it for us, ok? That means Thug Bob may get to move in the last segment next turn, but it keeps the wizard safe.

My wizard performed pretty well when it came to blasting things. In one memorable moment I lighting bolted an archer right off the top of a monument for the first kill of the game. I was not doing real well on the recovering treasure side of things so I ran my apprentice up to the nearest one and discovered dogs are pretty fast. I also discovered that even dogs can roll really well and he took out my apprentice in one round.

It does take a little getting used to how fragile things are. Figures have hit points which might make you think they're going to take a few hits to kill - maybe, maybe not.


As you can see, a d20 + a few, minus an armor number around 10 vs. a health of around 10 means a high roll can kill in one shot. There's also no mitigation from a high initial roll, so if I lose a fight 21 to 19 and I have 10 armor and 10 health I am dead - just as dead as if I had rolled a 3. I don't think it's a huge problem but it did require an expectations adjustment from me after seeing it in action.

In then end we came out about even. Blaster had more treasure but I had done more damage. He did much better in the gold department but when we rolled for character status after the game several of his soldiers will be sitting out the next game. All of my soldiers came thru OK but my apprentice will be out next time so that will be a challenge.

We played 5 turns in about an hour and a half and that's with building our warbands, choosing spells,  and fumbling around learning the rules for the first time. I'm pretty sure a regular game will be less than an hour assuming you don't have to pick your forces all over again.

We had a lot of fun and he was already talking about "next time" as we wrapped up so I think it's a winner. I'll post more when we play again.