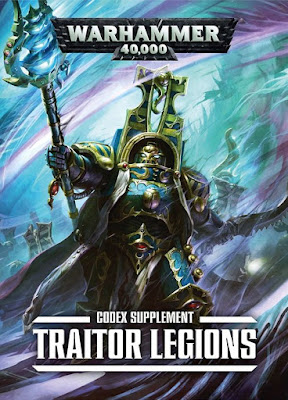 I'm a little late to the party on this one but better late than never, right? In case you were taking your time on this one like I was the short version is this: It's great, and if you're playing a chaos marine army in 40K you should seriously consider it. Since I'm trying to finish up my Iron Warriors -as much as any 40K army can be "finished"- I'm glad I picked it up now  as it changed the direction of my army somewhat.

So why is it worth getting?


I'm in the middle of building out an Iron Warriors army and I have a Plague Marine force as well. Both were originally designed around the traditional CAD. Both started out as ad-hoc forces as some unit caught my fancy and was added to the horde. Over time I developed a philosophy with each one and started a more guided approach to acquisitions. The goal was to fill out a CAD and maybe have some units allocated to a second CAD for bigger fights. 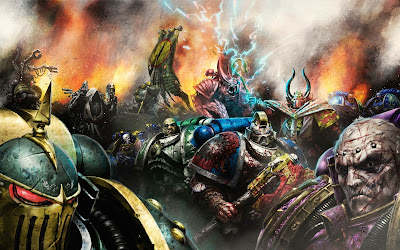 With Traitor Legions this changes. My IW's are mostly straight-up chaos marine squads. This makes them a perfect fit for the new Chaos Warband formation:
Now this is all stuff I already have and plan to use already. These guys all get objective secured (from the formation) and have Veterans of the Long War and  6+ FNP (from the IW rules)

There are a lot of other interesting formations in the book. Many of them require a warpsmith and I do have one, but I'm going to go with the good old CAD for the second part of the force. This lets me bring the rest of the units I have. It also gives me objective secured Obliterators which is an interesting new wrinkle.
The final element of the army is the Helbrute Mayhem Pack. This is one of the downloadable dataslates that consists of 3 individual helbrutes that deep strike in simultaneously. This is an awesome mix of surprise, effectiveness, and hilarity as at least one always seems to do something unexpected. Who needs drop pods? The loyalist scum are weak! Our dreads drop in with no protection at all!

One further option: Moving the Daemon Prince to a "Lord of the Legion" element and the chaos spawn to a "Spawn" element I can take the "Iron Warriors Grand Company" decurion and get Stubborn on those units and the Chaos Warband. 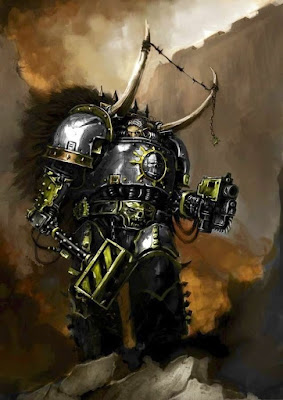 So, if you've been frustrated playing Chaos Marines in 40K for the last few years, or if you would just like some more options as far as building your army, take a look at this one. I think you will be pleasantly surprised. It's not the return of the 3.5 Codex but it is closer to that kind of book than anything we've seen since.
Posted by Blacksteel at 11:00 AM