Runequest 3rd Edition is mainly known as booklets in a box from Avalon Hill, at least in the US. It's also known for not being over-illustrated to be kind. It's the version I played the most back in the 80's, but there was another version released by Games Workshop in the UK. 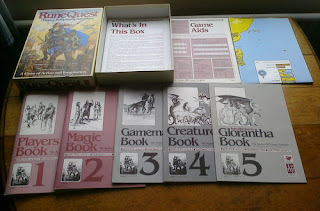 It's not terrible but it's all sparse black and white line art. 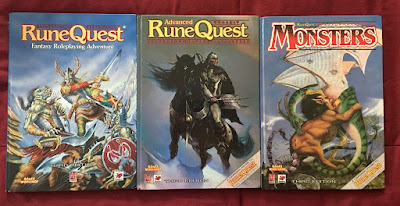 Also, they are hardcover books. They do have the infamous 80's GW binding which means they will come apart on you, but it's still cooler than a pink paper pamphlet.

The internal art is very different: 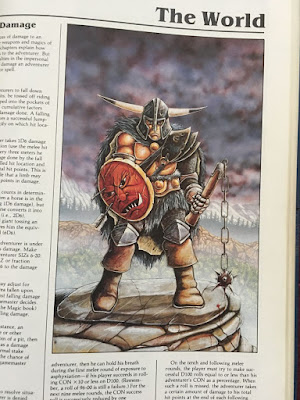 I'm pretty sure that's a chaos warrior from Warhammer. In fact, Warhammer's 3rd edition (where they went to hardbacks with some color inside) came out the same year as this book (1987). 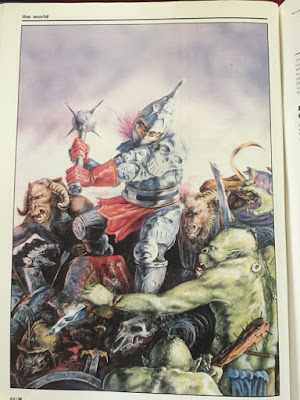 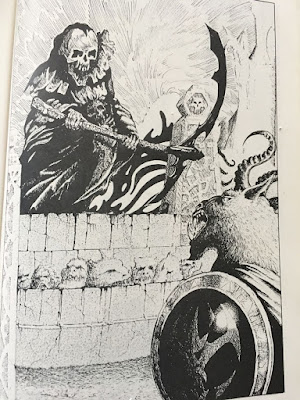 Even the black and white art is from warhammer. This gives the book a very different look and feel than the restrained presentation of the AH version. Not all of the art is repurposed from the miniatures game but even the other pieces use a lot of the same artists and so have a similar style.

Some stay that art in an RPG doesn't really matter. I will use this as a prime exhibit that it does, The art in here appeals to the 16-year-old in me way more than the AH version. Pictures of people picking fruit or preparing food or guys in weirdly ornate armor in weird landscapes or surging in the middle of a mass battle? That's an easy choice.

I'm sure a lot of this was dictated by the decisions to separate the rules from Glorantha in this edition. once you lose a setting like that you need something strong to replace it. "Fantasy Europe" as presented was not all that compelling in the AH version. GW's unstated but definitely illustrated option of Warhammer is much much stronger. It's not as culturally developed as Glorantha, but it's a visceral world full of conflict, magic, and enough history to get a party going.

I was a little surprised at the timing on this one when I went back and checked. GW had released the Warhammer Fantasy RPG in 1986. This came out a year later. There are enough similarities that I would guess RQ was one of the games the WFRP designers had played previously, probably more so than D&D or AD&D. I'm guessing RQ was popular enough to make it worth printing a new version - especially if you could save money by re-using Warhammer art - but it had to be separate from the WFRP line due to licensing  restrictions. It's an interesting situation where one company had two fantasy RPG's in print at the same time.

Anyway, I thought it was interesting enough to share. If you're a Runequest fan they're worth checking out.
Posted by Blacksteel at 12:00 PM

GW also had its own versions of Call of Cthulhu and Stormbringer; I think the reason behind them was that it was cheaper and easier to print a home-grown edition than import the originals from the US.

There's also a GW version of D&D but it came out much earlier than the Chaosium hardbacks. As I recall it's full of early John Blanche art.