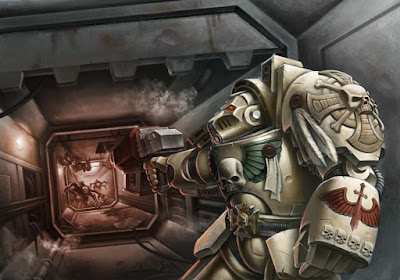 If you've played 40K for any length of time you've heard the legends of the Space Marine Terminators. Maybe you read them, maybe you've heard tales from earlier versions of the game, but you probably haven't seen a ton of "legendary" behavior from them in any recent games. The only type you tend to see these days are Thunder Hammer and Storm Shield Terminators and while they do usually perform as expected they are still an expensive and limited-purpose choice. I really dislike this state of affairs as they are one of the things I loved about 40K in the early days, so here are a few ideas about how to fix this problem:

Now I would be happy if any one of these was implemented and ecstatic if any two were. I'd say #1 and #3 make the most sense and would solve the two biggest problems they have in the game right now. #2 might be a little too much and #4 is probably too radical for how the unit has been portrayed but really any or all of these would help put terminator marines back in their proper place.

Special note: Chaos terminators? Yeah I'd do the same thing. Let them have some fun too. 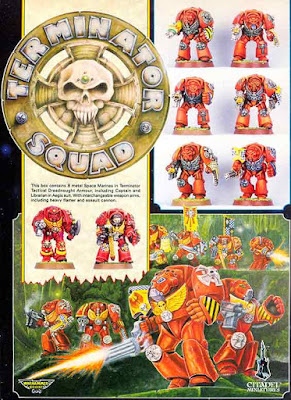 I do feel that the terminators have been lost a little as the line has expanded; you've got veteran-veterans in the sternguard and then even bigger suits of armour in the centurions, and now everyone can deep strike, so there's nothing special about the terminators any more.

I liked the days when they had the best armour save in the game -- 2+ on 2d6! -- and teleporting was their unique tactic.

Yeah I'd say 2nd was probably their glory days period and I loved that too. I'd still like to see them be better than they are right now. As you point out with the teleporting, it's not just stats! It's all about capabilities and what a unit can do that others cannot. Vanguard vets got to assault after deep striking at one point - but no more! I wonder why you never see them anymore?