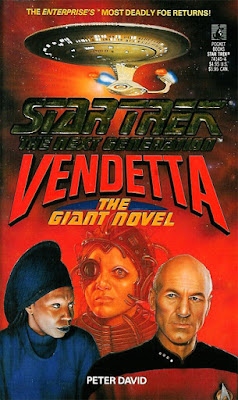 Did you know they were publishing TNG novels while the show was still on the air? They were! At least a few of us read them because according to the wiki this book went to #4 on the NYT paperback lists in 1991. I read this book later that year and it's the one TNG novel that has stuck with me over the years. I picked up a copy recently and re-read it and yes - I still like it! 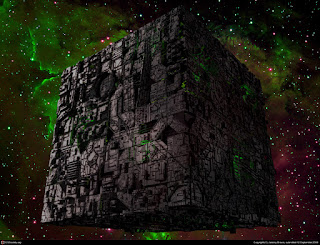 The summary: The borg show up and start cutting up a planet. Something else shows up and destroys their cube ...

Yes! In the tradition of King Kong vs. Godzilla we have the biggest bad of the Next Generation meeting an improved and nastier version of one of the Original Series space monsters! The fight is on! There's more to it than that of course, but my inner six-year-old is highly pleased and entertained just by the concept here. Plus - Guinan backstory! Rehabbing a female borg years before Voyager! Picard in love! Picard's acadmey rival! Ferengi! More Commander Shelby!

The details are that the original planet crusher was a prototype launched during testing without all of the capabilities of the full design. Who were the creators fighting? Why the borg of course! Fighting and losing, they put a huge effort into building a massive superweapon that could take on the borg from a position of strength. It never launched though as the war was over too quickly, but the spirits of the builders remain on board - there's treknobable to explain it - but they remain impotent until a living being shows up to bring the ship to life. Enter Guinan's "sister" - someone who lost too many friends and family to the borg a long time ago, she comes across the story of the TOS doomsday machine and backtracks it to discover the final production version sitting there waiting to go. She jumps in, and well, the "Vendetta" of the title is her desire to see the borg wiped from the universe and now she has the means to do so. Also:


One interesting angle reading it now is that this is pre-First Contact, pre-Voyager and all that so we only have the info on the borg through Best of Both Worlds. That means the borg aren't caught up in assimilating people - they're still really only interested in tech and resources. I suspect it would be a very different book if written today but this one still feels perfectly fine. It's also cool to see time spent exploring that whole "what do we do with a captured borg" idea before Seven of Nine was even a concept.

Obligatory RPG discussion: It's a heck of an idea for an adventure. Remove the Enterprise, replace with your players' ship. Make the academy rival NPC tied to one of your own PC's instead of Picard. Commander Shelby can still play a part and add a touchpoint to the show. The resolution would take some rethinking and you'd have to be careful to keep your PC's and their ship relevant when these titans are clashing but I think there's a very memorable RPG adventure waiting to be extracted here.

One final bit of praise: It would have made an awesome movie.

I read a ton of TOS novels but I never read too many TNG novels. If you're a fan at all this is the one I would recommend from That Generation.

This is the only Star Trek novel I've read. I remember finding it in a jumble sale and being a big fan of TNG reading it over and over again. I haven't read it in years so I don't know if it holds up, but I have fond memories of it.

I've read a number of books from all the eras (save Voyager. I have no interest in being further exposed to that ship, or its crew), and I have to say this is a favorite.

Like Kelvin Green I'm not sure how it would hold up, but as I tend to view things as occurring in the time they were made (and not comparing them to now) I suspect it would still be a rousing good yarn.

That really was one of the better early TNG books!

Now I kinda want to reread it...