40K-ish Friday: How I fell out of love with Star Trek Attack Wing

So back when we first got this game I was pretty excited. It played fairly fast, felt like Trek, and we had quite a bit of fun with it. The base game + a few more ships played better than the X-Wing basic set, probably because each ship has a little more personality than the fighters in X-wing.

As time went on though, I lost interest in it. Why? Well, there are two main reasons:

First, the ships have mediocre paint jobs and are not in scale. This wasn't a problem with the starter set so much but it gets weird when the Defiant is bigger than the Excelsior. The D-7 is as big as the Vorcha, the Bird of Prey is bigger (!) and the TOS Romulan Warbird is bigger than the TOS Enterprise! It goes beyond "loose" when it comes to scale and slides fully into "dumb". 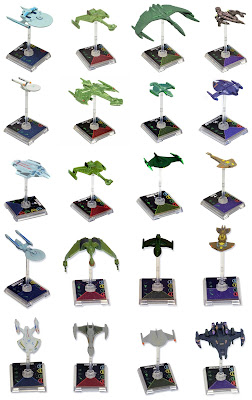 I'd like to think I'm not that shallow but one of the major attractions to a miniatures game is the visual appeal and when it looks wrong it hurts. Plus these are designs I've been staring at for over 40 years in some cases and there's a near instantaneous "that looks wrong" thing that kicks in when models of them are not done right or not done well. The miniatures themselves are not really bad - there are some amazing repaints that demonstrate that the basic models are decent individually - but the scale thing really hurts my ability to enjoy the game.

I'm sure a lot of people don't care - I didn't either at first - but it's really turned into a problem that damages the game for me, and yes, the existence of that "other game" that is doing it right does have an impact. In X-Wing the ships are all in scale with each other, from A-Wing to Millennium Falcon to Tantive IV and they're all painted really well and they were that way from the start! Given that the price points for the games are about the same it's clear to me that the Trek game could be handled quite a bit better than they have been. 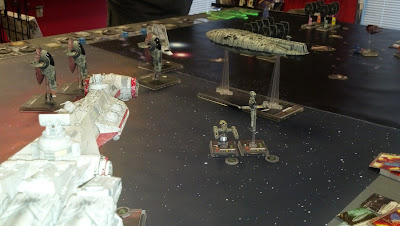 The Second major issue for me is this:

There was a Wave zero for launch, then 4 ships per wave through the 4th, then 3 ships after that, so Trek is probably over 90 ships now. Plus some of these are repaints. Plus there are many tournament prize ships that are repainted versions of existing ships with unique cards that are not available in stores and that may take the total over 100. It's a lot to keep up with and I don't think it's playtested and balanced as well as X-Wing which is important in a popular tournament game.

X-Wing has 4 ships per wave plus some repaints in separate packages and the big ships and has a little over 40 ships so far altogether. X-Wing doesn't doesn't do prize ships - they give away cards with alternate art, medals, special dice, and special templates. Things that are cool but not mechanically different than what everyone can purchase.

The prize ship thing is particularly irritating - want the Enterprise-A? Its a prize ship! Same thing for the nifty borg-assimilated versions of the Galaxy, Bird of Prey, etc. Stuff like that is a huge turn off as I have no interest in playing in store tournaments but the only other way to get those ships is to wait for them to show up on eBay and pay 3 or more times the price for a normal ship. A repaint alone wouldn't bother me but the cards which include the unique ship, some unique crew, and maybe some other types of cards as well turn it into a different ship in the game, not just a different-looking ship.

Compare this to X-Wing where anyone can pick up any ship in the game in any store but they still manage to give away unique items that let other people know you've won some games.

Now WizKids has done some good things - the oversized Borg cube and the large Deep Space Nine model are very cool. The gameplay is solid. There are quite a few more factions to choose from than in X-Wing because that's just how the setting breaks down for each one and I'd say that's an advantage for Trek.

But the game still looks rough, especially next to a game of X-Wing.

I don't hate it - I really like it, that's why I want them to do better! What I would love to see is some kind of a reboot with an announcement that they're going to re-launch the game with every ship in-scale and with X-Wing quality paint jobs. I know there are repaints of some older ships coming out and some of those do look better but I'm not a fan of silver on the federation ships. Heck, I'd just be happy with the scale fix and I'd handle the paint upgrades myself if I thought it was worth it.

That scale thing is baffling; I can't imagine why anyone thought that would be a good idea.

They had started up a Trek heroclix ship game in 2012 and just used those same ship models for the Wing game a year later. It makes some sense business-wise but honestly it was one of the things that kept me from getting into the clix version - the ships were all out of sync with each other. I swallowed it for the Wing game because it was more my type of game but it finally got to where I couldn't ignore it anymore.