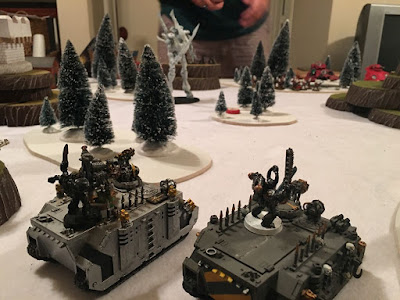 After sticking pretty religiously to my vow to go "Eldar Only" this year I decided it was OK to take a brief detour into other armies. This also would give the apprentices a chance to shoot at something besides space elves too so it was good for all of us.  I talked about the Blood Angels already and so this time I want to talk about the Chaos Space Marines and their fortunes against Blaster's Eldar and Red's Orks.

I won't get into all the details of each battle as we're working on putting them up as video batreps. I'm more interested in the general state of the army as one of the core elements of the 40K universe:

Chaos is one of the great bugaboos of the Warhammer 40,000 universe. For a while now it's been represented by two separate armies: The traitorous chaos marines and the otherworldly daemons. The daemons are still a reasonably competitive army with their own special rules and tricks and quirks. The marines though are in a sad state. They are supposed to be the most personal nemesis of the loyal Space Marines and a serious threat to the Imperium of Man but on the table right now they are overmatched in every way. I've been hearing a lot of complaints about them for a while now so I wanted to see for my self.


In both games I took my Iron Warriors core force of 3x 10-man squads of CSM's in Rhino's, a squad of plague marines, a havoc squad (autocannons), a triple-lascannon predator, all led by a warsmith and a demon prince. This is a force you could have taken going back to about 2nd edition and all of these are pretty basic elements to a chaos marine force. To bring it into the current edition I also took a Heldrake and the Helbrute Mayhem Pack formation.

Basic CSM's are mostly notable for not generally appearing in 7th edition CSM armies. Consider: The Eldar jetbike has the same armor save and toughness. Both are Leadership 8. Both are objective secured in CADs. Both weapons are strength 4 with 2 shots within 12" but the bolter can take one shot up to 24" instead. The Windrider has a base move of 12 instead of 6 and can boost up to 36" in one turn. Because it's a flying thing it ignores terrain while moving.


This shows the problem in a nutshell. When I looked at our forces set up on the table I realized that every unit the Eldar had - except for one guardian squad -  could move at least 12", ignored terrain while doing so, and had weapons that were at least strength 6 and range 36" - typically with multiple shots or twin linking.  The CSM's had the predator with a 48" range and the havoc squad with the same, and one CSM squad had one missile launcher. The three Rhino's do move 12" but they do not ignore terrain and do not carry a heavy weapon, and unlike the loyalists Chaos does not have the option for Razorbacks which do at least carry a decent gun. The demon prince did have wings (at a 40 point upgrade cost) but has to be cautious because he can be wounded by every gun in the eldar army, unlike the wraithknight who can ignore bolters which are the majority of what the CSM's are carrying.

So the mighty chaos marines are
I'm not pining for the days of the 3.5 chaos codex (where my Iron Warriors were particularly potent) but I'd like for them to be in line with most other armies, loyal marines in particular. I know there are some supplements rumored to be on the way but I have a hard time seeing how a campaign book is going to make enough improvements. I'd like to see a new, solid base codex that we can build on for a few years instead of limping along on hope and allied forces.
Posted by Blacksteel at 1:20 PM