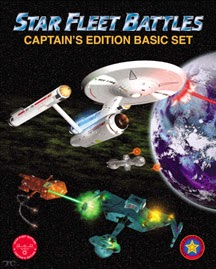 The Present
During this long mid-90's onward lull part of the reason I stopped playing SFB was the "hassle factor" - there are a ton of ships, a ton of rules, and a ton of ways to play. Setting up a game can be like a treaty negotiation to clarify what era and types of ships are involved, then once that's all settled it takes a fair amount of time to play out a battle. Filling out energy allocation forms seems really old-school after playing everything from 40K to Full Thrust. A bunch of small flat counters on a flat black hexgrid are not as attractive as they used to be either. Sometimes it's worth all of that hassle, but increasingly it was not. There were two bright spots here though:

The Star Fleet Battle Force card game came out in 2001 and is a fun little combat game. It should be, as it's a shameless clone of Naval War (from Avalon Hill), a WW2 battleship card game that was one of my main casual/in-between game games in the 80's. If you have fond memories of Naval War you should SFBF up as it's probably easier to find now and has much higher production values. 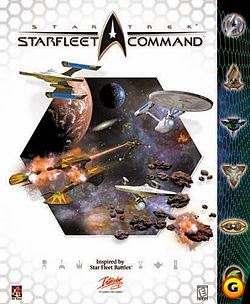 Star Fleet Command was a series of 4 computer games that was effectively SFB on the PC. The ships looked different, some of the names were changed (the Kzinti became the Mirak, presumably due to legal concerns), but it was very faithful to the original game and added an exploration/upgrade element that made for a really fun solo game. This was probably the last time I really dug back in to my SFB stuff looking at lore and details.

About 2005-2006 word came of a new game coming out - Federation Commander. This was to be a simplified version of Star Fleet Battles, which I had some concerns about at first - how much simplification could you do and still have it resemble SFB? The answer is "a lot" and after buying the first boxed set I knew this was probably the future of the SFB universe for me. 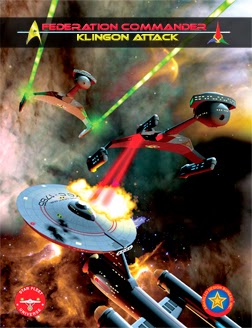 The simplification is in cutting out a lot of the extra options and complications that have built up over 3 decades of SFB. Things like 20 pages of drone options, smaller stuff like transporter bombs and scatter-pack shuttles, big things like fighters and PF's for every race. In Fed Commander drones are speed 24 and do 12 points when they hit - period. There are some mentions of optional speeds for different eras, but they are "options" and not a core part of the game. Not having fighters and PFs (and the associated drones) all over the map makes a huge difference in speed of play.

The single biggest change though is the elimination of the energy allocation form. No longer is paperwork for every ship - a fairly big stack in the kinds of battles we used to play -  a part of the work for every single turn! Instead, each ship starts with a pool of power points generated from the warp engines, impulse engines, and reactor power on the SSD just like SFB. Instead of having to allocate those up front every turn, instead, Fed Commander is a pay-as-you-go system. The beginning of the turn means choosing a base speed of 0, 8, 16, or 24. Everything else is spent during the turn - want to fire that disruptor? Pay your 2 points, 4 to overload!

The sequence of play is simplified too - instead of the old 32 impulse chart with 32 separate opportunities to move and make firing decisions, it's broken into 8 "impulses" with 4 movement phases each. So, plasma torpedoes are still speed 32, but there are only 8 chances to agonize over firing/turning/speed changes each turn which makes a tremendous difference to the speed of play. 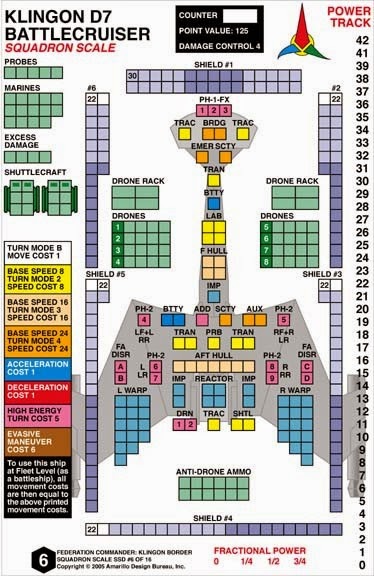 Beyond these changes the game still uses ship displays and if you ever played a Fed CA or a Klingon D7 in SFB the SSD's for them for Fed Commander are immediately recognizable. They do use color now which is a nice upgrade, and they come on laminated cards in the box to help eliminate the need for photocopies. I think it's a little funny that they've come around on this now that many of us have scanners and printers in our homes but I appreciate the effort.

So, energized by this new interpretation of an old familiar game I dove into it whole-hog, picking up the first two big sets and some "booster packs" with more ships in them. With a local wargame con coming up in the near future I thought I would take the new game up and run some demos. I came up with a scenario that would accommodate 6 people, I made up a new planet miniature, a new doomsday machine/planet crusher miniature, and I even picked up micromachines of Next Generation ships to use to give it some visual distinction and show that it was a new game. I was set to run a session on Friday evening and two more on Saturday, and I was pretty pumped. 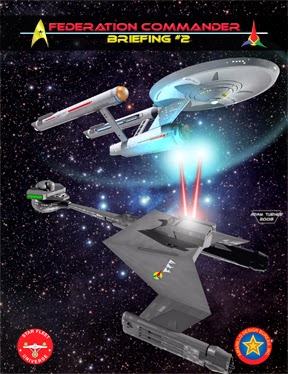 I took my big box of stuff up that afternoon, set up at my table and was pretty pleased with the look of the whole thing. I poked around the rest of the hall for a while and found that 4 people had signed up for my game - awesome! The time came to start and found that 2 of them had crossed their names off the list and the other two never showed up. Sessions 2 and 3 had zero takers. I still did my duty and sat by my table when the game was supposed to go but I ran nothing that weekend. I had some good talks with passers-by about the new game, and I played some stuff myself in other timeslots, but as far as actually getting Fed Commander out there it was a total bust. I thought my "pitch" in the con guide was good but maybe not. I'm pretty sure it wasn't me personally because no one ever made it to the table for me to run off! I took it as a sign that getting people interested in an SFB type game was probably going to be an uphill fight.

My interest dropped after this, not solely because of the con but also because none of my old SFB-playing friends seemed all that enthused either. We played a few times, but I was the only one bringing it up and no one else was interested in picking up their own copy - a telltale sign. I couldn't get strangers to play, I couldn't get friends to play, and the kids weren't old enough yet to play.  I started to wonder if maybe the time for the game, and the setting, had just passed. I still followed the game online, but I stopped pushing it and stopped adding new material. There's a ton of it as it is covering all of the same ground as SFB, but even I eventually stop spending money on a game when I'm not playing it.
Posted by Blacksteel at 12:00 PM