The Good Old Star Fleet Universe - The Past

The Past
I got started in the Star Fleet Universe in 1982 when a friend brought over a copy of "Federation Space" and we spent an afternoon playing Tholians against Klingons. It was interesting and fun and he mentioned that Michael's (yes the craft store - they used to sell games too!) had another game like it but he bought this one because it was $2 cheaper. Within the next week or so I talked mom into taking me over to said store and picked up the "other" game on the same subject and spent a good chunk of the next 20 years playing Star Fleet Battles.

It's a complicated game and it takes a fair amount of time to play. Back then we had plenty of time and with birthdays or Christmas or just allowances to pick up the occasional expansion we had plenty of material to work with too. I started with the Designer's Edition when Expansion #2 was the new hotness and Expansion #3 was out pretty quickly after that, When the Commander's Edition came out we jumped in and kept up with it in Nexus and Captain's Log. We even picked up a few miniatures along the way though that was never our primary way of playing - we liked ridiculously huge fleet battles too much to ever have enough mini's to fight our kind of fights. It was 90% counters on a hex grid for us. 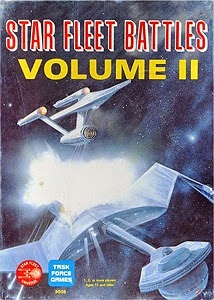 Along the way the universe expanded considerably too. Keep in mind that in the early 80's the only canon material we had was the original series, the animated series, and two movies. There was a novel line that had some interesting books but Trek was pretty quiet as far as developing the setting compared to what it would become later. The only two ongoing "universes" that had regular releases were Task Force's Star Fleet Universe and Fasa's Star Trek RPG universe. We had both, played in both, and liked both. The SFU added new races, new ships, a detailed future history, and just a ton of material all based around the original Trek series. There was no overt movie material, although some nods were there if you looked. 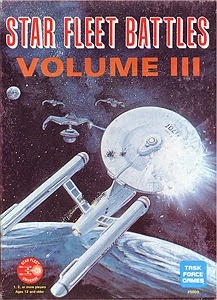 With the arrival of the 90's we had yet another edition of the game and bought all of the material for a third time. It seemed like it was worth it because this was the "doomsday rulebook" that promised to clean up all of the errata and errors and glitches that had cropped up during the rapid expansion of the Commander's Edition and was only going to clarify and fix, not add new material via errata. I wasn't as enthused about this repurchase, but I did it, and true to their word, this edition of the game is still the current edition, twenty years later. There's a bunch of it, but to have kept the game to the same edition for that long may be unique in the gamin industry, whether RPG, miniature game, or boardgame. That's a great way to treat your customers and keep a huge game sane on at least one level.


Despite that my playing time dropped precipitously in the 90's. It was a combination of things from finishing school and getting a real job (and later a family too) to other games like Warhammer, 40K, and Epic moving into the spotlight. So oddly, even though it's been out the longest of any edition, Captain's Edition is the one I have played the least. I have most of the stuff for it, I just haven't played it much in the last 15 years.

More to come!
Posted by Blacksteel at 1:00 PM

I have more on SFB/SFU/FC this week.

Also - East Texas, you're not that far away!