Trek Tuesday - Where No Man Has Gone Before 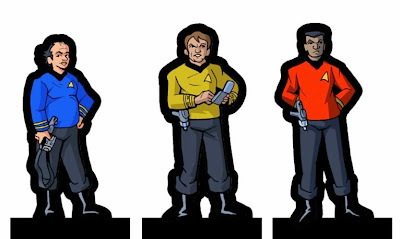 In contrast to the big glossy production I revisited last week, there are other approaches that are worthy as well. Where No Man Has Gone Before looks to me to be an ICONS type take on a Trek RPG - not in mechanics but in staying light and loose. Here's the introductory quote from the game:

This is a game about a five year mission, a world where
special effects never progressed beyond painted
Styrofoam blocks and cheap double-exposures. The 70's
were still The Future and Klingons had smooth
foreheads. The idea of a Star Trek movie was a
laughable proposition and nobody thought twice about
planets full of Nazis and space hippies.

I'm thinking you either read that and think it sounds cool or you laugh and close the browser.

Assuming you're still reading the game can be found here. It uses the Microlite d20 system so it is broadly compatible with d20 stuff that is already out there. Significant differences:


The Talents are great and capture the spirit of the original show perfectly and are thematically appropriate to each class. There are chapters for personal combat and starship combat that look like they would work well. There is an equipment chapter as well. Some stock NPC's and aliens, common ship designs, and lots and lots of random charts to help a DM run things on the fly.

Notable fun-ness: The "God" section in the Enemies and Allies chapter:
Plus a list of godly powers.

There is also an appendix on figuring the ratings for your series which can lead to unexpected complications like the dreaded "Monkey Sidekick".

All of this is packed into just 45 pages! It's certainly enough to run a few one-off sessions and likely enough to run a mini-campaign. I think the limited list of enemies and ships might become restrictive over a long campaign but there is an expansion, "Controlled Implosion" which adds more goodness - and more random charts - in another 18 pages. There are also paper mini's (shown above), multiple character sheets, and a lifepath generator. It's an amazing little package.

All in all it's a very different approach to Trek than the Last Unicorn version. Where LUG Trek takes it straight and serious this is completely tongue in cheek but does have some ways to reward good setting-appropriate roleplay with Action Points and the expansion has more advice on running it straight as well. If you're at all interested it is definitely worth a look.
Posted by Blacksteel at 12:00 PM