Wrath of the Righteous - Session 1 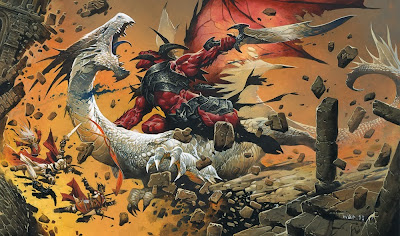 Note: There are spoilers below. There are always spoilers in my summaries but since this is a new adventure series, not an old one or a homebrew I thought I ought to specifically mention this.

Heroes gather in the crusader city of Kenabres on the edge of the Worldwound. The annual festival of Armasse draws in scholars and warriors from all over the region. Among them are four of special note:

After gathering in Clydwell Plaza at noon for the opening ceremonies for the festival the characters find themselves awakening in darkness, battered and covered in dust. Their memories gradually return as they begin to  collect themselves. As the festival was about to begin, there was an explosion, then a mighty flame and lightning wrapped Balor swooped in as the silver dragon xxx threw off her human shape and blasted out of the crowd to meet it. Things went badly from there, as more demons appeared, some of massive size, smashing buildings aside. As the crowd scattered, the dragon was taking the worst of it, but still managed to magically break our heroes fall as the square collapsed. While the darkness closed in, the last sight for the plummeting crusaders was the demon warlord hoisting the severed head of the dragon for all to see.

Now, awakened, battered, and worried about might be going on above them our heroes discover that most of the people around them are dead, though a few have survived. One, a female human scout has a broken leg. Another, an elven mage was blinded by a demonic slash. A third human male seems to be physically undamaged but has a rather unfriendly attitude and is anxious to find his way home. The group pokes around the rubble, splints her leg, finds her a crutch, and bandages the wizard's gashed eyes. They also decide to travel together to find a way back up to the city.

Exploring the caverns beneath the city is a slow business, and there are signs of the upheaval everywhere, but they do make progress. Though some vermin is dispatched and Relyn suffers a venemous snakebite, there is no sign of civilization until the party discovers a small shrine to Torag. The shrine turns out to have one "inhabitant" - the skeletal remains of its builder and priest who is now an undead creature! The foul thing is destroyed quickly and the party tries to set things right, even though none of them follow Torag. That night they dream about the shrine, and the life of the sole dwarf who chose the spot, built it, and worshipped in it alone for decades until despair and madness turned him from his path. The next day the heroes take their time restoring it to a proper state before moving on.


DM notes: This was the first part of "The Worldwound Incursion" and it kicks things off with an "en media res" style introduction. Knowing that 1st level PC's are not really up for a frontline role in a demon invasion, they get dropped into the mysterious caves beneath the city and have to find their way up into the  light again. It's not really a railroad as it happens before the game starts, and that makes the difference for me.

The NPC's in the adventure stayed mostly in the background as my players are old school and don't have a ton of use for them. They did arm the limping female with a bow so she could keep a lookout, and there was some conversation but their focus is on getting out, not making lifelong friends and I'm not going to force anything on them. I present what's there, the players act as they see fit.

This adventures does not have the usual kobolds or goblins as low level opponents. It starts out with mostly vermin type monsters and that's what they fought. Combat in PF goes quickly at low levels so I won't go into round by round details - no PC's or NPC's died. The poisonous snake gave us a chance to refresh on PF's poison rules but the Paladin survived without too much drama. Staying overnight in the shrine also let us review the healing rules - to some dismay. We'll just have to see how that holds up.

Production-wise I'm running this one with Hero Lab for character building  then Combat Manager for running the fights. As we started the first fight I realized that I didn't have a file for one PC as he had made his character in PC Gen. No problem - I whipped him up in HL in maybe 5 minutes and threw him right in too. It's a different kind of prep work but it's still less hassle than printing out my monster stats and notes. Also: No DM Screen, all open rolls. It didn't make a huge difference in this session but it might down the road.

Overall it was a good session, the players got along alright, and the mechanics were not a problem. We're all looking forward to the next session and there is a chance one more player joins in - who is already being pressured to bring in a cleric, for for it's thematic appropriateness and for the healing. Session 2 is this coming weekend so I'll post about it next week.
Posted by Blacksteel at 12:00 PM