So I saw this Monday night: 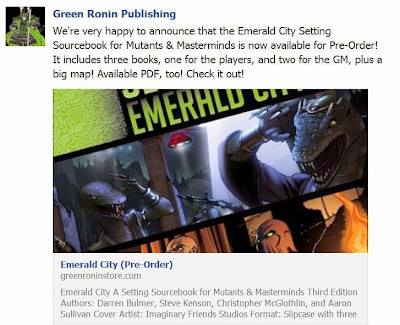 .. and I thought cool, it's finally on the way. I'll have to look at it and see how much and when.


Then on Tuesday I received this:

... and I was thinking this was a pre-order for the PDF- NOPE! It's the actual PDF! You can go to DTRPG and download it now!

As much as I like PDF's for some parts of RPG's I still forget sometimes how the timing works on these things now: If it's ready to print it's ready to sell as a PDF!

Now if this was another enemies type book I'd be fine picking up a PDF - I've come to realize that those benefit a lot from the electronic option as I can print out only the parts I need. Especially in a supers game I find I only need a couple of pages to run an entire evening. This is how I have been using the Threat Reports for M&M.

Short adventures are handy in PDF too - print the stat parts out, maybe the map pages, and run the rest from a laptop or tablet. The many adventures for ICONS have been nice using this kind of approach.

This, however, is not an enemies book. It's a setting - with a poster map and other goodies.I'd really rather have this one on paper to flip though, pass around the table, and otherwise handle. That's just my own preference.

It is more expensive (double the PDF, and that's not a cheap PDF either, but it is a lot of material) and it will take longer, but it's worth it to me.

Then of course there is the larger question of "how will I use it?" or "when will I run it?" and that's hard to say. I've gotten away from buying stuff I know I won't use but I am trying to pick up everything for M&M as it comes out because it all feeds into a mighty, mighty system for a superhero RPG. Even if I don't run it as-is, there's a chance parts might appear in my own setting.

I'm also toying with the idea of giving it to one of the Apprentices, unread, and telling them to get ready to run it. It's just a glimmer right now, but it's there.

Regardless of the eventual usage I'm happy to see it released and I will post more about it when I do actually do something with it.
Posted by Blacksteel at 12:00 PM

Oddly torn on this one.

I say oddly because it's M&M and I love me some M&M.

I have every book ever put out by Green Ronin for all editions of the game and I plan to get Emerald City too.

This is a very pricey product and my funds are low these days. It may be forever before I can pick this up.

In addition, from everything I've seen of Emerald City and it's inhabitants so far, I would much rather have had them give this level of treatment to a Freedom City Sourcebook. The Emerald City Knights and their enemies are just not that cool. They remind me too much of The Champions for the Champions 4th Edition game.

Good think the Holidays are coming up.

Oh I get it. They are positioning EC as the "new" city with a lot less in the way of super-history and established groups. If you run a party through the campaign included in the box then they are the "Emerald City Knights" and not the sample characters.

(BTW, which one is Seeker? Maybe we need them on more covers to judge!)

In the Good News department, I think Freedom City is due to get this same treatment next year..

The price is kind of steep on this one, but it is a lot of material and I think it'll be worth it. I've been waiting on this book for a while so I'm probably going to pre-order soon.