Just to throw something different out there, here's an update from the world of Star Trek Online: 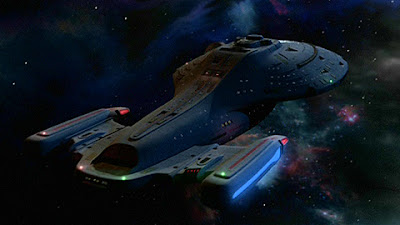 At the end of last month’s State of the Game there was a poll that asked the following question: “Which Trek series’ ships, characters, species, and stories, would you most like to see more of in a future STO Expansion?”

Here are the results of that poll as of today:

Argh ... the worst of the various Trek series is suddenly the guiding light for the game that covers all of them. I'd prefer to see this as more than 50% of fans who voted saying "anything but Voyager" but I don;t think they will take my interpretation of it. I would expect TOS to come in fairly low as quite a bit of it is in the show already, and there's a fair amount of TNG and DS9 in there too. However, I would rather they mine every last scrap of cool from those shows than start paying more attention to Voyager.

To be fair the article does address the difficulties of mixing Delta Quadrant stuff in with the traditional Trek material they already have and I kind of like the approach they are contemplating. I do think it would be strange to have a playable faction in an MMO RPG that is completely cut off and separated from the existing factions in the game, and I can't think of another game that has tried that. If they find a way to do it right though I would at least give it a look.
Posted by Blacksteel at 12:00 PM

That seriously makes no freaking sense.

Seems set up almost. That is to say, If you check out polls on any other Star Trek related site, from startrek.com and trekbbs to ones on facebook, Voyager practically never comes in first for any category.

I find this even more odd considering the average age and demographic for those who have stuck with Star Trek Online over this length of time.

Section 31 is up to something.