The Lone Ranger - A View From Texas 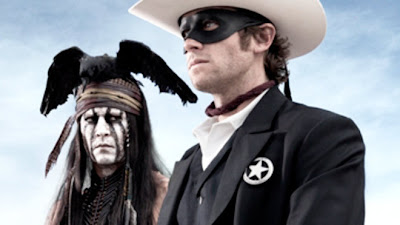 So a heavily-promoted movie came out and is failing. I did go see it and thought I would share a bit. 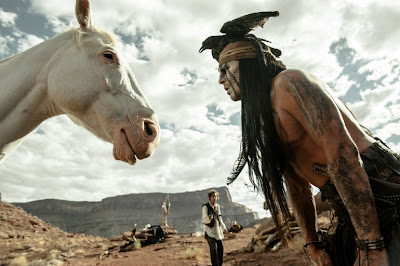 
Outside of these I think the biggest meta-problem is that this was made by the same team that made Pirates of the Caribbean and in that there was a heavy mystical element right from the start whereas here there is none. There is a lot of alluding to Indian mysticism, but there's no actual payoff.  This limits what they can do character-wise and plot-wise and was probably a mistake. Either go totally real and gritty and make a modern Lone Ranger that way, or let some mysterious stuff happen, similar to the Indiana Jones movies, and don't try to explain it.

Spoiler: When they started talking "Wendigo" and Silver Bullets I thought we were about to get this kind of movie - then it pretty much fizzled out like a wet firecracker.

I also didn't like the two-faced attitude towards the source material. They're making a big-budget movie based on something and when the classic overture kicks in as the big finale starts up (the first time in the movie that it is heard) I admit it felt pretty good. But making the hero a bumbling greenhorn was not a good choice, putting it almost to the level of Big Trouble in Little China's hero-as-sidekick as Tonto's competence and general savvy (heh) overshadows him. Plus, at the very end of the movie, there's a slam on a classic Lone Ranger bit that seems like a pointless cheap shot at the original and I didn't like that either. "we'll take the mask, the copanion, the silver bullets, and the theme, but this other part is dumb so we'll just make fun of it instead" - bad move.

In the end I didn't hate it but I was disappointed with it. A new western franchise that was as much fun as the Pirate movies would have been a very cool thing to have over the next few years, but that's not likely now. I will say if you want to watch a good actor play a quirky, interesting character in a western, you can skip this and go watch "Tombstone" and have a better time.