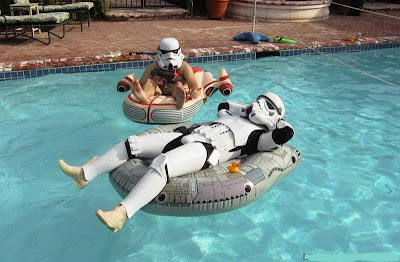 I think that may be the first time I've had two Motivational Monday posts with nothing in between. With the Apprentices busy for the first part of the summer and the main group having schedule difficulties it's been pretty slow here for the past few weeks when it comes to RPG's. I've been playing more online games and spending some time on building up armies and terrain for 40K  With the camps and rehearsals and practices wrapping up I hope that next week yields more fun-time for all of us.

Among the requests have been D&D, Supers, likely Marvel, and Star Wars. SW is a little tricky as Apprentice Blaster and I spent some time last week digging into The Old Republic as Jedi and he would like any tabletop time we get to allow him similar options.  This pretty much means "I want to play a Jedi that can do some interesting stuff right from the get-go and not feel like an old-school first level D&D wizard."

The d6 game has never really catered to starting out as an aspiring Jedi badass. Even if I talked them into trying it again I'm not sure it's going to give them what they want. I might start with 1st edition + some extra skill points but even then I'm not sure it's right.

Saga actually comes the closest, allowing combat-competent Jedi types right from 1st level. We do have a campaign that's been underway for a long time - maybe this is a good place to start. Plus it has a lot of support for the KOTOR era and the Clone Wars era which are the sweet spots for them right now.

Then there is also the new thing, the FFG Edge of the Empire. The custom dice have kept me away from it, plus the seeming focus on Rebellion-era fringer play - I did that back in the d6 edition and I'm not really eager to do that all over again with new mechanics. However, the reviews I keep reading have me thinking that it may work out similar to the MWP Marvel game with all of the narrative dice-pool building fun and less emphasis on grids and physics. If it comes close to that then it would definitely be worth a look. A different mechanical approach plus the challenge of using it for an Old Republic game if we go that direction makes it interesting. 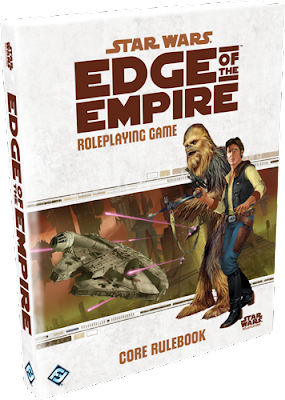 That said I watched this video with Blaster and he was unimpressed with the force approach. At one point they mention that you can start off as a newbie force user in Edge, then train up through the rebellion book that's coming down the road, then go full Jedi in the third book coming after that. His comment was "that seems like a lot of work when I could just start off as a Jedi in the one we already have."  and to a point I agree with him. I do like the idea of getting in at the start of a game that I know will be well-supported and growing with it but this would be Yet Another Star Wars game to some degree and I do have some of those already.

I may look into the beginner box as a one-shot and see where things go. If it's not a hit then Saga or a Savage Worlds adaptation is the next step.
Posted by Blacksteel at 12:00 PM

I was a little underwhelmed by the free RPG Day adventure FF made for the new Star Wars game, mostly because it a) didn't feel particularly "Star Wars" but more "generic alien-heavy sci-fi ne'er-do-wells" but also because the complex social interactions between these criminal types, which should be the bread and butter of the gaming, were reduced to single die rolls.

I loved the WEG Star Wars rules, and are not that off-put by the weak Jedi, mostly because in the original movies Jedi were pretty weak. Darth Vader moved like he had arthritis and used his powers to strangle people with the force instead of his hand. While Yoda lifted an inactive starfighter, you got this was a big deal involving heavy concentration.

What wrecked it, IMHO, was the Clone Wars cartoon on Cartoon Network, which had Annakin waving his hands and throwing hundreds of droids into the air. Jedi went from being samurai with a few odd tricks to full-blown superheroes. And at that point the discrepancy between them and everyone else in the story makes translating that into gaming very, very problematic.

The new Star Wars game by FFG is a real oddity to me. I'm a bit confused by the thinking that went into its development.

At this point in the life of the Star Wars entertainment juggernaut, doesn't it really make sense for the first, core book in your game line to not provide a way to play Jedi?

Sure Han Solo is awesome, perhaps my favorite character (next to Chewie of course), but he is the only Smuggler featured as a major hero in 6 movies and numerous seasons of an animated series.

There has now been more Clone Wars material produced than non-prequel material. That stuff features Jedi.

Between the strange focus and the weird dice, I'll stick with good old D6 thank you very much.

Weird dice? I will tell what that's about: every gaming group will only buy one rulebook, so they got to make their money.

It's odd that BA and I disagree, but my experience has been that the "merchant marine" campaign is the standard campaign for a lot of people. Now I will say that if you're not running guns for the Rebellion and don't have one Jedi posing as the technician, then go run Alternity or something.

Exactly Robb! This is what I've been saying to a rather narrow minded crowd on Google+ recently.

It's not that I think everyone wants to play a Jedi or that no one wants to bounty hunt and smuggle their way across the Star Wars universe.

My point is that you can do that anywhere. It is unreasonable to think that when I purchase a game covering a particular IP setting the game should have information on elements specific and unique to that setting? Is that considered un-hip these days or something?

I see you two are all over this one!

It's difficult to tell from the reviews that are almost all gushing with praise for the system exactly what the adventures cover but so far the consensus seems to be that "awesome system" outweighs any railroading or other weaknesses. Plus I'm likely to run my own stuff so if the system is solid I can overlook the adventure issues.

I agree on the d6 Force approach - when it was current that was how things worked. The last 15 years of updates though have expanded this pretty dramatically though.

I can understand the lack of Jedi from a design point of view - force powers are probably the trickiest thing to get right in a Star Wars game so starting slow with them makes some sense. However, that same lack limits the areas of Star Wars that you can cover - like the Clone Wars and the Old Republic era. With only the limited "wannabee" talent tree available I can't really run those games.

The Beginner Box comes with dice and it's not much more than buying the dice alone so I'm leaning in that direction.

I'm with y'all - I can run merchants/smugglers/scum in ANY game, from Traveller to Trek to Shadowrun to Mechwarrior. The Force/Jedi/Sith thing is unique to Star Wars and so I wonder about any SW game that minimizes it to this degree.